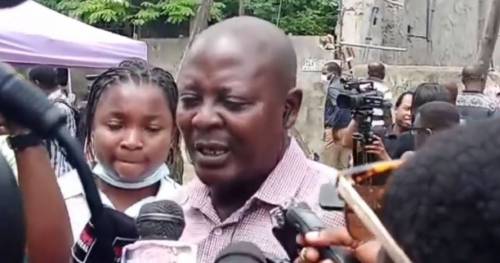 In what will come across as a really heartbreaking development, a man who identified himself as the father of Emmanuel, one of the victims of the 21-storey building collapse in Ikoyi, Lagos, has lamented the unfortunate incident.

The aggrieved father explained that his son, alongside his colleagues, was at the site with the boss when the building suddenly collapsed.

According to him, about five people from Emmanuel's office visited the site and only one person survived.

He also said Emmanuel's boss has now been confirmed dead.

The distraught father urged the state government to intensify rescue efforts so he will know if his son is dead or alive.

Speaking to journalists at the site, he said: “I've been calling his boss, his colleagues in Abuja said they have been unable to get him. I came here and saw things myself. I have seen the picture of his boss, he's dead.

“Five of them came here, only one person survived and that person came either to charge his phone or to rest because he took drugs, according to what they told me, and the person came out and saw the building going down.

“Ever since then, I have been trying to speak to my son and to also get to speak with his boss but his number was not available until I came here yesterday and stood here and I was shown the picture of the boss, he's dead.

On Monday, the building located on Gerrard Road, Ikoyi, Lagos collapsed with a yet-to-be-ascertained number of persons still trapped beneath the rubble.

SaharaReporters earlier reported on Thursday that the death toll at the site had risen to 38.

Emergency workers have evacuated nine persons alive from the debris of the fallen building.

According to Highbrow Living Magazine, the collapsed property, comprising four-bedroom maisonettes, flats, duplex and penthouses, was 65 per cent sold out.

The price range for the apartment is also said to be between $1.2 million and $5 million.

The structure was said to be 80 percent completed and was billed to be concluded in 2022.