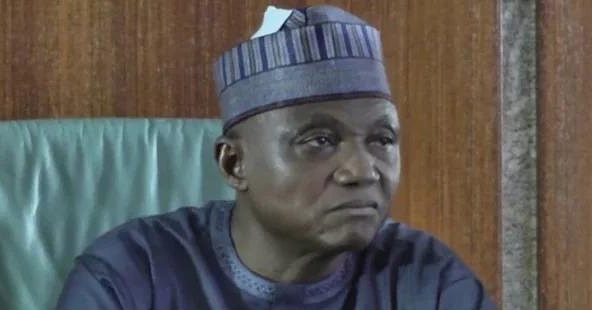 The Senior Special Assistant to the President on Media and Publicity, Garba Shehu, on Monday confirmed “a foolish attempt” to burgle the residence of the Chief of Staff to the President, Prof. Ibrahim Gambari, inside the Presidential Villa, Abuja.
He claimed that the incident that happened around 3am was not successful.
The presidential aide wrote, “The Chief of Staff, Prof. Ibrahim Gambari, has confirmed that there ‘was a foolish attempt’ to burgle his residence at 3am this morning, but it turned out to be unsuccessful.
“Prof Gambari, whose house is on a street next to the Villa, has assured that there is nothing to worry about from the incident.”
An online newspaper, Peoples Gazette, had earlier in the day reported that armed men suspected to be robbers invaded the residences of two senior aides to the President, Major General Muhammadu Buhari (retd.), inside the precinct of the Presidential Villa.
The medium repoted that the incident forced Gambari and the administrative officer, Abubakar Maikano, to abandon their residences.
“Their houses were robbed and the robbers packed money and other valuable assets from both houses,” the medium had quoted a source as saying.
It is yet to be ascertained how armed robbers gained access into the well-fortified Presidential Villa manned by a combined team of policemen, officials of the Department of State Services and men of the Presidential Guards Brigade of the Nigeria Army.