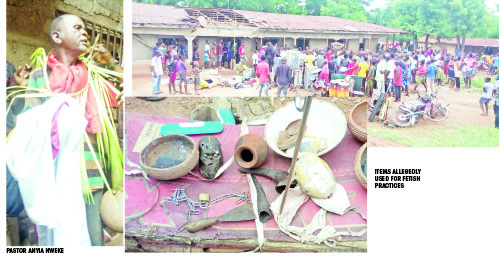 According to Sun News, the people of Ndiechi Onuebonyi in Igbeagu, Izzi Local Government Area of Ebonyi State are still in shock following a recent discovery that a man they had embraced and accommodated for 11 years as a pastor was actually ‘an agent of the devil’ immersed in fetish and occult practices.

They alleged that the elderly man of about 70 years, Ezekiel Anyia Nweke, pastor in charge of Yahweh Kingdom Community Worldwide at Ndiechi Onuebonyi village, Obubra Junction in Igbeagu Community, had a hand in several misfortunes of their people, including their stagnation.


When a mob stormed his church and threw his property outside on that fateful afternoon of May18, 2021, all manner of items that could be found in a native doctor’s place were discovered there. They included carved doll; frightful black wooden mask, padlocked chain, earthen jars with burnt substances, animal horns, female bras, swords, and others. There was also a wooden baton with ‘His Excellency, Engr. David Umahi, Executive Governor, Ebonyi State’, inscribed on it.

Saturday Sun gathered that members of the community, mainly youths, on noticing all these items, and coupled with allegations already levelled against the purported man of God, paraded him round the community amidst torture. They hung palm fronds on his body; sang and booed him in their native way as a means of atonement for the alleged sacrilege. The crowd was marching him out of the community with a stern warning never to set his foot there again when the police reportedly intervened.

The embattled pastor was then rescued and kept in custody at the Police Divisional headquarters, Iboko, Izzi LGA.

But Pastor Anyia denied the allegations levelled against him, saying his ordeal was a set-up by certain persons whose names he did not give.

“I have not offended anybody since I started the church. But unexpectedly, in the early hours of May18, some persons stormed my church, woke me up and led me to where they said a sacrifice was kept.


“Before, I could know what was happening, they had barged into the church and ransacked everything therein, including some materials which I do use to treat sick persons,” he said.

The man further denied any involvement in fetish activities or other related acts and as a result called on God for mediation and vindication.

A resident of the area, Christopher Igube told Saturday Sun that his wife woke up early morning on Tuesday, May 18, only to notice Pastor Anyia, as he is fondly called, sprinkling some concoction on a dead goat, which aroused her suspicion and that of other neighbours.

When his (Igube’s) attention was drawn to it, he accosted the pastor only to notice on closer inspection that it was actually his own goat that had been slaughtered.


Upon interrogation, the man allegedly became incoherent in his explanation. The altercation that ensued attracted other neighbours who joined in the fray.

Eventually, the crowd that gathered went into the pastor’s apartment, only to discover many fetish objects like carved doll, female undies, condoms and several pictures of people including some of their known neighbours lying before his shrine with some unprintable inscriptions.

Igube said that what they discovered in the pastor’s apartment incensed the crowd who wasted no time in unleashing a mob action on him before the police were eventually attracted to the scene and they took him to avert his being lynched.

The mob, however, vented their spleen on his household belongings, which were promptly brought out in the open compound and burnt. They include furniture, clothing, kitchen items, electronics and electrical appliances as well as a motorcycle.

Saturday Sun learnt that the man, said to be from Awkunanaw in Enugu State, had no family there but lived with a young lady of about 22 years. Another striking thing was that the newspaper could not identify a single member of the church in the community before the banishment.

One of his neighbours, whose picture was also found in the shrine, Chima Igele, said the pastor had refused to pay rent for the apartment for the past three years.

Igele, who is Chairman of Eguegbe Boys Progressive Union (EPU), had allegedly rented the place to the said pastor. He told our reporter that the union had fought a long drawn battle with Pastor Anyia over rent.

According to him, the union took him to court and obtained a quit notice, which was duly served on him, but he had remained adamant, claiming that the building now belonged to him.

“Every effort by our union to enforce the court order and make him to pay the rent arrears of N250, 000.00 met stiff resistance until the goat incident that exposed the dark side of the acclaimed “man of God” happened,” Igele said.

He added that the people around had been wary of the sinister mode of the pastor’s operation, which they linked to a series of accidents occurring within the axis of the Obubara Junction.

They described his present ordeal as good riddance to bad rubbish, even as they expressed hope that justice would be served, including helping them recover the rent arrears of N250, 000.00

Another eye witness and resident of the area, Sylvester Nwokpuru claimed that out of magnanimity, the pastor upon his arrival in the area, some years ago, was freely shown a big bungalow to be used as church by a particular family.

Unknowingly to the donors, he was only carrying out his fetish activities in the guise of running a church until recently when people became curious on why they were experiencing many strange happenings ranging from mysterious deaths, incessant road crashes within the location of the church, sudden disappearances of female undies, among others.

He narrated: “As we were still wondering why a series of inexplicable calamities were befalling our village, suddenly, we began to notice that Anyia Nweke were performing some dangerous sacrifice secretly.


“And our people having observed keenly the suspicious evil acts, decided to keep surveillance on the man’s activities until the fateful day, when our people woke in the morning and found another irritating sight involving already killed goat which was kept at the entrance of the so-called church premises.”

According to Nwokpuru, the pastor was immediately summoned by some persons after the goat sacrifice was discovered but surprisingly upon the confrontation, the man reportedly flared up and challenged the persons on why they would poke their noses into his affairs.

Along the line, the man received more than he had bargained for, as the people angrily invaded the church and found out other unimaginable quantity of fetish items and plenty charms at the altar and other parts of the structure.

Another resident, Chukwunonso Igwe also claimed that the pastor was responsible for all the unknown misfortunes, including economic retrogression and strange ailments affecting some indigenes of the village. He pleaded that he should be severely dealt with so that others still hiding under Christianity to perpetrate evil would learn their lessons.