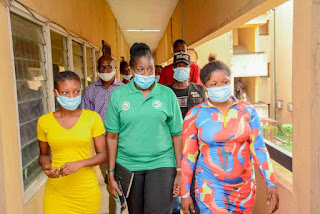 Precious Adeyemo and Abiola Oyefule of Olabisi Obasanjo University, Ayetoro campus, have been handed over to their parents, hours after their release by their abductors.


The Ogun State Commissioner for Health, Dr Tomi Coker, presented the two students to their parents in front of the Governor’s office, Okemosan, Abeokuta.

The two were kidnapped in front of their hostels on Sunday night by yet-to-be identified gunmen.

They were rescued on Tuesday night and kept in police custody until Wednesday.

While presenting the students to their parents, Coker said the two are fine and in good health.

Commissioner for Information and Strategy, Waheed Odusile in company with Commissioner for Education, Prof Abayomi Arigbabu, have earlier presented the duo to journalists.

According to Odusile, no ransom was paid for the release of the students.

Odusile barred journalists from interviewing the students and their parents, who accompanied them also refused to grant press interviews.