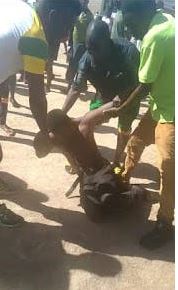 In what will come across as a really shocking development, a barber in Neshuro community of Zimbabwe has reportedly faked his death.

The man pretended to have died after being attacked by a taxi driver and his friends for sleeping with his wife.

The barber identified as Emmanuel Chipepetseki a.k.a Chipaz, was caught red-handed in the act on March 15.

It was gathered that on the day of the incident, the taxi driver Andrew called his wife informing her that he was not coming back home as he had secured business at the border town. His wife then reportedly made arrangements with Chipaz to come to her place and spend the night.

Andrew who reportedly had a change of mind and canceled his trip, showed up at his place in the middle of the night unannounced and caught his wife and Chipaz in their bedroom having sex.

Chipaz managed to escape and disappeared into the dark even though Andrew unconvered who he was.

The next day, Andrew gathered his friends and began a manhunt for Chipaz who was found relaxed at his house near Neshuro Growth Point. The taxi driver and his friends bundled Chipaz into their car and took him to the growth point where they thoroughly bashed him.

To save himself, Chipaz pulled a death act prompting his attackers to retreat. Realizing that there was a window to escape, Chipaz bolted away to safety.