See the Businessman Caught With Cocaine At Abuja Airport (Photo) 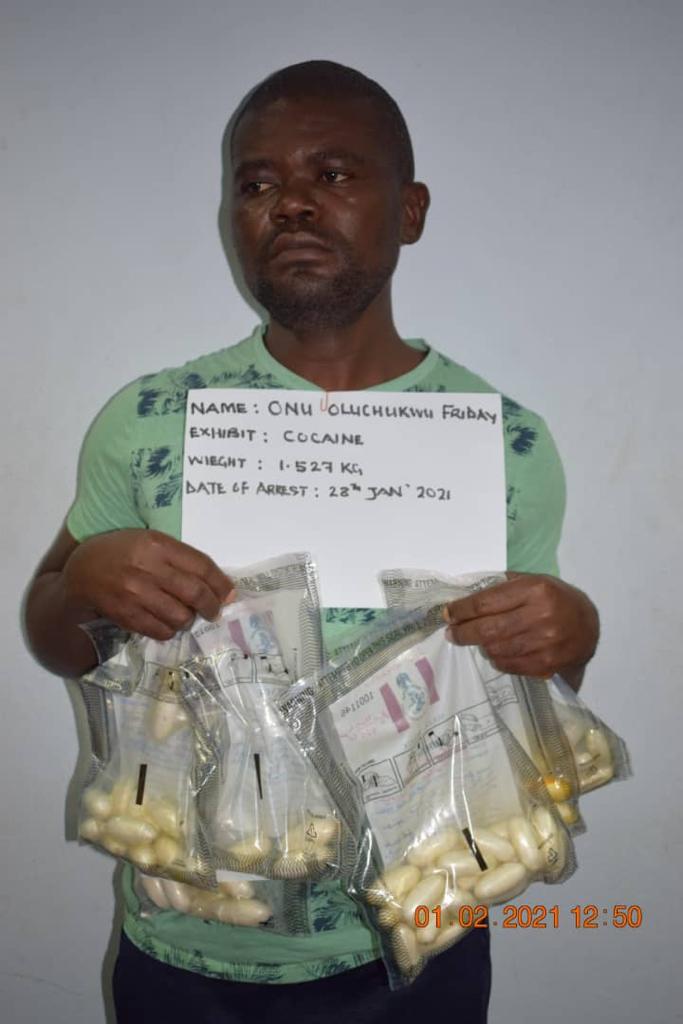 Onu Friday
A businessman has been apprehended with cocaine at the Nnamdi Azikiwe International Airport (NAIA), Abuja. While another was also arrested in Lagos with cocaine.

According to the National Drug Law Enforcement Agency (NDLEA), the businessman arrested in Abuja has been identified as Onu Oluchukwu.

The spokesman of the agency, Mr. Jonah Achema, said on Thursday in Abuja that while “Adeleke Kazeem Biola was arrested at the Lagos airport with 1.5 kilograms of Cocaine on Wednesday, 3 February 2021 during the outward clearance of passengers on Emirate airline to Dubai, a Lagos based businessman, Onu Oluchukwu Friday, was caught with 1.527 kilogramms of the illicit drug at the Abuja airport.”

He quoted the Commander, MMIA Command of the NDLEA, Mr. Ahmadu Garba, as saying that the suspect, Adeleke “was intercepted at the departure hall of the Lagos airport with the hard drug neatly concealed in a false bottom of his travel bag.”

Garba acknowledged that the series of arrests in the past three weeks follows the offensive action approach deployed by his command in line with the directive by the new Chairman/Chief Executive of the agency, Gen. Mohammed Buba Marwa (retd).

While explaining how a plumbing materials dealer, Onu Oluchukwu Friday was arrested at the departure lounge of the Abuja airport on Thursday, January 28, 2021, the Commander, NAIA Command of the NDLEA, Mr. Kabir Sani Tsakuwa, said “During outward clearance of Ethiopian Airline ET 910 en route Abuja-Addis Ababa -New Delhi, India, the 39 years old suspect, a native of Umuaku-Isuochi village in Abia State was intercepted at the boarding gate screening and referred for scanning.


“The passenger proved positive for ingestion. He excreted 83 wraps of substances, which proved positive for cocaine and weighed 1.527kg. The suspect who claimed he is into plumbing material business in Lagos came into Abuja for the purpose of trafficking drugs said he was to be paid N1.5m on delivery to one Chibuzo Nmadu, a Nigerian based in India.”

Tsakwa said his command remains committed to the mission of the new leadership of the agency to disrupt the supply chain and reduce the demand for illicit drugs in Nigeria.

On his part, the Chairman of the agency, Gen. Marwa (retd), commended the commanders of the Lagos and Abuja airports commands and their teams for their vigilance, while urging them to intensify efforts so that the mission to rid the country of the scourge of illicit drugs can be collectively achieved.