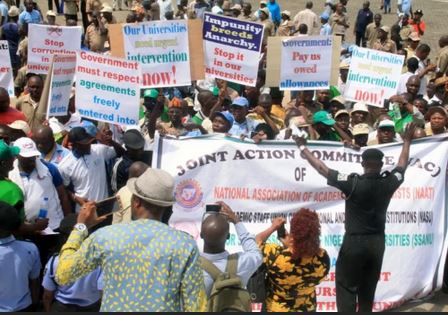 File photo
SaharaReporters reports that the non-academic workers at Nigerian universities are planning to go on strike.

The workers have announced plans to commence an indefinite strike on February 5.

The Joint Action Committee of Non-Academic Staff Union of Educational and Associated Institutions (NASU) and Senior Staff Association of Nigerian Universities (SSANU) disclosed this in a communique on Friday.

Part of the communique read, “It is in line with the resolution of our members nationwide, that the leadership of the Joint Action Committee of NASU and SSANU hereby resolve as follows:

“That members of NASU and SSANU shall embark on an indefinite, comprehensive and total strike with effect from midnight of Friday, 5th February, 2021.

“That two weeks’ notice effective from today, Friday, 22nd January, 2021, is hereby given to the government and relevant stakeholders of this development.”

The staff members under the aegis of JAC (Joint Action Committee) had earlier said they would protest over inconsistencies in the Integrated Personnel and Payroll Information System (IPPIS) payment alongside the delay in the renegotiation of the FGN/ ASUU/SSANU 2009 Agreement.

Others were the nonpayment of retirement benefits to former members, non-constitution of visitation panels to universities, poor funding of universities, teaching staff usurping the headship of non-teaching units, among others.

The Nigerian government, had in December, approved N40 billion earned allowances for the four university unions and allocated 75 per cent of the amount to the Academic Staff Union of Universities, leaving 25 percent for the other three unions.