Nigerian Actress, Nsisong Daniel Reveals When Kissing On Movie Set Turned Her On 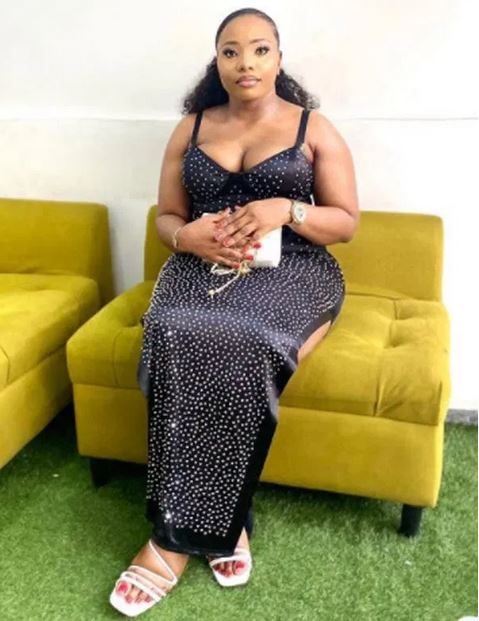 There is no doubt that many Nollywood actresses have at one time or the other described their boobs as their biggest selling points, claiming that the melons not only got them the desired attention, but that their boobs also opened doors for them. The same is the story of Nsisong Daniel.

Nsisong, who hails from Akwa-Ibom state, but now plying her trade in Asaba, Delta state said she receives a lot of compliments on her melons, which give her the impression that they are her biggest assets.

On whether she had been sexually harassed in the industry as a result of her boobs, the actress answered in the affirmative. “Verbally, yes I have been harassed, but I never failed to put my harassers in their right place and make them understand the need to be civil with their words.”

Nsisong also confessed that she once got turned on while acting an intimate scene in a movie.

She narrates: “I have been turned on before on a movie set. Naturally, I don’t like kissing, but on that very scene, I found myself kissing him passionately and even longing for more.”

Nsisong said that no matter how intense the romance scene is, she tries as much as possible to remind herself that it’s just business. But on that very scene, she totally lost control of herself.

In fact, following her ugly experience with men in the past when she was heartbroken on a number of occasions, Akwa-Ibom state-born actress declared that she has no love life.

“I don’t have a love life. In fact, I have never actually had any,” she snapped, adding “I have been heartbroken several times, but how I still end up loving again remains a mystery to me.”

Recalling her ugly past, the busty actress said she was fooled into dating a man who was married with kids. “He was so loving and caring. He showed serious commitment and even promised marriage. Little did I know that he was married with two kids. I mean he carefully hid the information from me and kept saying he was single.”

On her acting career, Nsisong said “I started my acting career in 2012, but I couldn’t concentrate because I was still in school then. I later came back in 2016, working as a script supervisor before finally veering into acting in 2019.”

She said her big dream was not only to make more positive impact on the society, but to become the next big actress to emerge from the Nigerian movie industry.

Since debuting her acting career, Nsisong has starred in such films as “Tiger Queen”, “Childless King”, “My husband and I”, “Family Matters (My daughter and I)”, “Escaped for Love”, “Beautiful Sisters”, “Marriage Warriors”, “Illiterate Pretty Woman” among others. No doubt, the actress is steadily rising to the top.