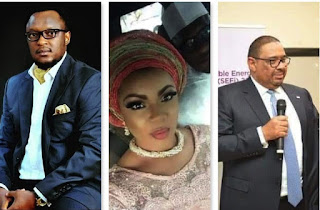 Friends of late Tunde Thomas, whose wife Moyo was impregnated twice by Adam Nuru, the suspended managing director of First City Monument Bank (FCMB) said they have closed the campaign, with objective achieved.


The friends, who came together as Justice for Tunde Thomas, mounted a campaign for signatures in a petition addressed to the Central Bank of Nigeria and FCMB board.

The campaign, which gained traction in the social media, attracted over 2,900 signatures.

On Thursday, the group said it is moving on, having achieved its objective, with FCMB board asking Adam Nuru to step aside as it probes the matter.

“The forced exit of Adam Nuru from FCMB bank and the immediate appointment of another MD is the least and we have achieved that”, said the group, whose arrow head is Akure lawyer, Bolanle Cole.

“What a way to end a career for Adam Nuru and this is just the beginning for him.

“The action by FCMB should bring closure to this case and it will always be a landmark reference”, a spokesman for the group wrote.

Here is the statement by the group:

On behalf of friends , associates , family etc of our beloved Late brother Tunde “Gentle “ Thomas, I wish to sincerely thank each and everyone of you.

With this little pressure supported by all you , we hope to put an end to even the tiniest of injustice and this outcome will surely serve as a deterrent to people in places of influence who think they can do whatever and get away with it.

The forced exit of Adam Nuru from FCMB bank and the immediate appointment of another MD is the least and we have achieved that. What a way to end a career for Adam Nuru and this is just the beginning for him. The action by FCMB should bring closure to this case and it will always be a landmark reference.

I am happy to have championed this with no ulterior motive whatsoever, the only reason I championed was to prove to a Nigerian in diaspora as he was of the opinion that nothing whatsoever will happen to Adam Nuru. In his words “ no be Nigeria , nothing go happen “.

At least, he knows Nigeria can work once we set our mind to it .

May the soul of our friend Tunde Thomas rest in perfect peace . Thank you all.”

The campaign by the group began on 30 December, with the petition filed at change.org.

It was titled, Compel the CBN & board of FCMB to dismiss Adam Nuru on ethical grounds (marriage scandal).

Tunde Thomas died recently like about a week or 2 from Depression. Apparently, kids from his marriage to Moyo Thomas belongs to wife’s boss (Adam Nuru, the current MD of FCMB). Moyo Thomas left Tunde to go to America with the kids, she told him kids were not his when she got to America. He was later down with stroke but recovered.

Apparently, Tunde met someone else he was going to remarry but apparently didn’t recover from the first Marriage issues. Tunde was just made director for the MFB he works for. Got back from work last week and had a cardiac arrest 2 days before introduction to pregnant new girlfriend.

This is a case of gross misconduct based on ethical grounds and an unjustifiable economic oppression by the elites (Adam Nuru) against the less privileged in the society.

The MD has been doing everything possible to sweep this case under the carpet. We implore the Central Bank of Nigeria as the apex regulator and the board of FCMB to investigate this for the integrity of the bank and Nigerian banking industry.

This is a case too many , while I agree that this is not the full story , the barest minimum will be an investigation to this unethical conduct by the current MD of FCMB Bank Adam Nuru.

Lawyers told P.M.NEWS on Thursday there was no way Nuru would have survived the campaign as he breached the Code of Corporate Governance for officials of publicly quoted companies.

“There is a section devoted to ethics in the Code. There are provisions there that implicitly captured the FCMB MD’s scandal”, said Adebayo Osikoya, a lawyer, based in Ikeja.