Busted!! Police Arrest Gang That Clones Prepaid Meters To Allow A Single Token Be Used On Many Meters 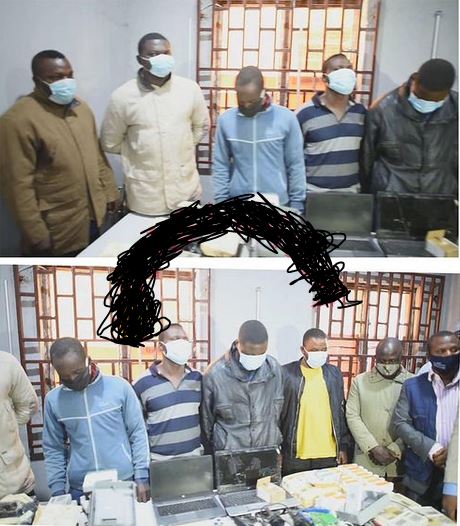 The Suspects
Seven suspects who specialize in metre cloning, metre theft, metre vandalism and other electric associated crimes in Kaduna and its environs have been arrested by the Special Investigation and Prosecution Taskforce on Electricity Offences (SIPTEO) North-West zone with headquarters in Kaduna.

Parading the suspects at their Kaduna office Monday, the Head SIPTEO North-West zone, Assistant Superintendent of Police ASP. Aliyu Bamalli also disclosed that two of the syndicates are still on the run and being trailed.

According to ASP Bamalli, the suspects were trailed and eventually arrested following a consistent report by Kaduna Electric of energy theft, vandalism among other crimes hampering the effectiveness of their delivery, and a victim of the Syndicates activities who also reported to their office.

ASP Bamalli also disclosed that the suspects succeeded in cloning 2 metres into 13 metres with the same number, adding that the suspects were arrested in Barnawa in Kaduna South local government of Kaduna State and are still being investigated for necessary prosecution.

“We succeeded to arrest the syndicates following diligent investigation and manhunt because we work with Electricity Distribution Companies to safeguard against energy theft,” he said.

Earlier, the head of marketing of Kaduna Electric, Abubakar Jimeta and Head of Operations Engr. Abu Abass both averred that energy theft has caused the company loss of revenue running into hundreds of millions of naira.

They both assured that Kaduna Electric will continue to do their best in partnership with SIPTEO in the provision of improved power supply.