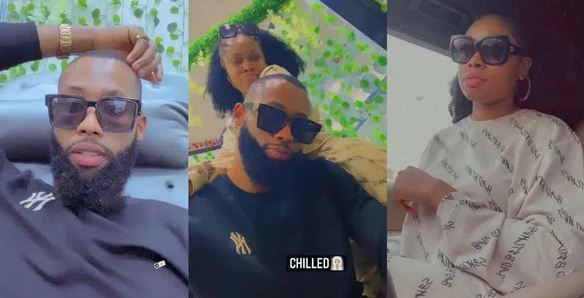 Tochi, Princess
Reality stars, Tochi and Princess, have sparked off dating rumours after a video of both of them in a cozy position surfaced online.

Tochi was a contestant of the recent “Lockdown” edition of the Big Brother Naija reality TV show while Princess belonged to the 2018 cohort.

In one of the videos, which was posted on Tochi’s Instagram stories on Wednesday, January 27, 2021, the reality TV stars looked all lovey-dovey.

In another video that has already gone viral, they were spotted laughing as they snuggled, also smoked together.

Tochi also took to his official Instagram page and posted a GIF photo of himself and Princess lying down closely to each other while hanging out.

They have, however, not denied or confirmed their relationship as at the time of filing this report.