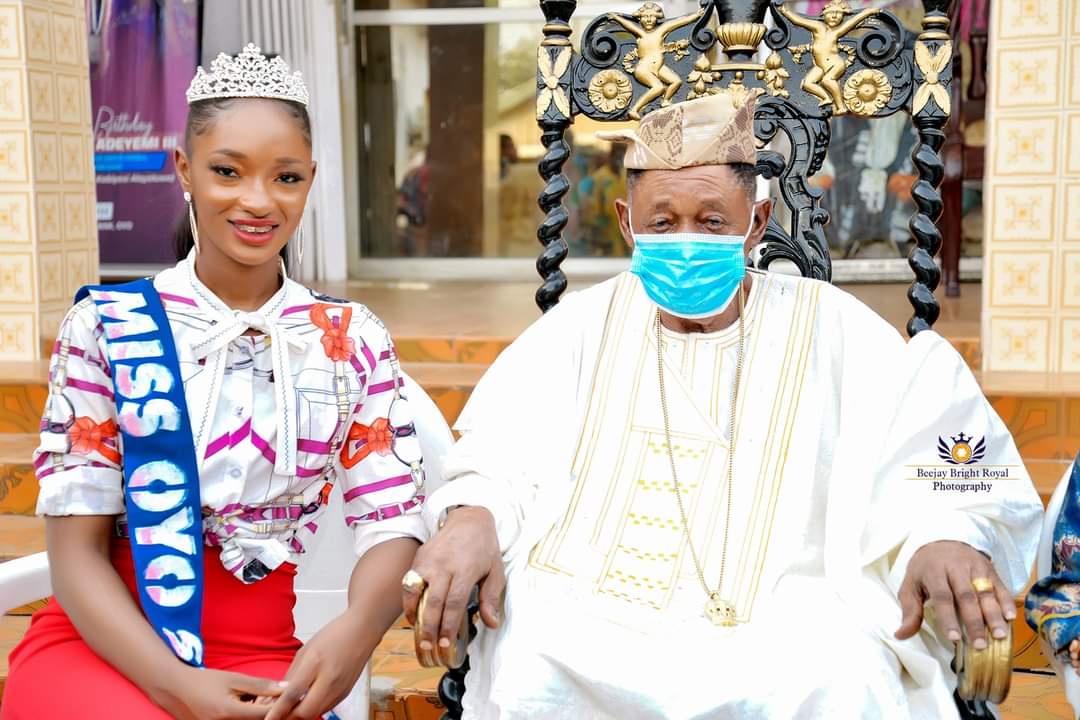 Princess Adeyemi is one of Alaafin's daughters.

At the annual event held at Jogor Center, Liberty Road, Ibadan, the 24-year-old lady defeated other contestants who represented the 14 federal constituencies in the state. The graduate of History and International Studies from Osun State University (UNIOSUN) went home with a Toyota Camry Car, among other prizes.

She also visited the palace of the king in Oyo to present the price and get her father’s blessings.


Adedoja, who is currently studying for a Master’s degree in African Studies at the University of Lagos (UNILAG), is Chief Executive Officer of SS Foundation, a non-governmental organization.

She shared her story in a chat with Punch below:

I am 24 years old and a daughter to the Alaafin of Oyo, Oba Lamidi Adeyemi. I am enthusiastic about African culture and domestic tourism. I run a blog where I showcase and promote African heritage. I am also the co-founder of a non-governmental organisation, Adeyemi Sisters Special Foundation. I am the Vice-President of the Yoruba Tourism Forum as well. I like activism and human rights too. During my undergraduate days, I was a unionist. I was the social secretary of the National Association of Oyo Students, and the vice-president of the History and International Studies Student Association at Osun State University in 2015 and 2016 respectively.

My fondest childhood memories were during holidays. Most of my cousins and other relatives spent their holidays in the palace, and there were a lot of cultural activities. I remember we played a lot, went for physical training with Alaafin on weekends and took holiday lessons in English, Arithmetics and Arabic. The elderly queens in the palace taught us cultural norms, etiquette, and royal poetry (oriki).

I attended St. Francis Catholic Nursery and Primary School, Oyo, for my elementary education. I proceeded to EACOED Model High School, Oyo, for my secondary education. I went on to Osun State University, where I got a Bachelor of Arts degree in History and International Studies. I am currently pursuing a Master’s degree in African and Diaspora Studies at the University of Lagos.

When I was younger, I was not particularly close to the Alaafin because he treats all his children the same way. Even his adopted children and other relatives have equal access to him. However, I am a bit closer to him now, especially since I studied History at the university. Me and my father talk about history and culture, as well as other relevant personal and real-life topics. Sometime ago, I was to write a seminar paper for an international conference and I was in Lagos observing the national youth service scheme and I needed his help. From Oyo, he sent text messages of relevant points to me. Our relationship is very cordial. We don’t talk every day but when we do, it is always inspiring and insightful.

I have cordial relationships with my stepmothers and sisters. There is a tradition of co-existence in the palace. If my father takes a new wife, she would have a palace mother among the elderly wives who would teach her about the culture and traditions of the palace. When the new wife gives birth, her child would stay with her palace mother. My father’s first wife, Ayaba Abibat Adeyemi, is my mum’s palace mother. She has been taking care of me since I was a baby. Whenever I am in the palace, I sleep in her quarters. Some people even think she is my biological mother. My biological mother is Ayaba Mujidat Adeyemi.

As a daughter to the Alaafin of Oyo, one has to work extra hard. We (Alaafin’s children) were brought up to always work hard. My father is a no-nonsense man and he does not joke with discipline. My siblings are all hard-working because our father does not give room for mediocrity, and that has helped us in understanding real-life situations. Often times, people think one does not deserve what one gets or works hard for, just because one is a princess, and that is very sad. Those who know me can attest to the fact that I do not just rely on being a princess; I like to make things happen (for myself). Being the daughter of a first-class king can open some doors but only character would keep those doors open. 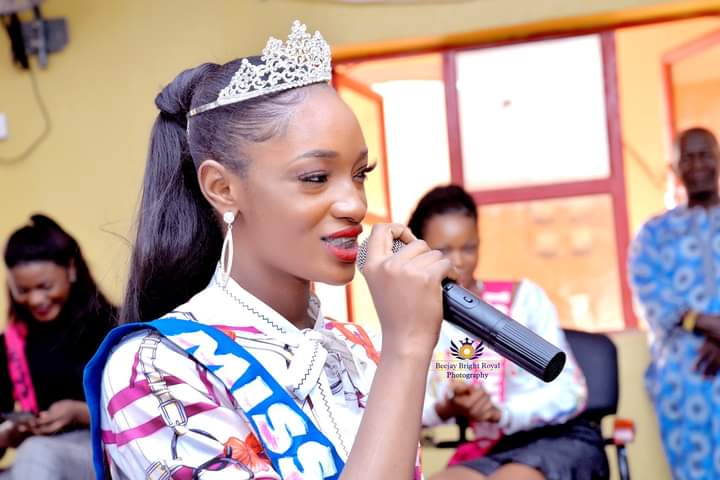 Adeyemi Sisters Special Foundation
In 2015, when I was the Social Secretary of the National Association of Oyo Students, we celebrated Children’s Day with pupils of the Oyo School for the Handicapped. They were so happy to receive us and their house mistress told us that the children usually didn’t get invites for Children’s Day events. However, I witnessed something beautiful that day― about 95 per cent of those children had talents. Some could sing, some could drum, some could dance and some were very vast in current affairs. So, I told my friend, Owolabi Jamiu, that we had to do something to make the children always happy. That occurrence increased my love for humanitarian concerns and we visited them occasionally. In 2017, my elder sister, Adeteju, who worked as an administrative officer at the Federal College of Education (Special), Oyo, told me about her love for people with special needs and how most of them were very hardworking and brilliant. I also told her about my 2015 experience and she said we should start a foundation. That was how the Adeyemi Sisters Special Foundation became operational in 2017.

Initially, I was not a pageant enthusiast and this is the first time I contested one. When the form for the Miss Oyo pageant came out, a friend and former Miss Oyo State, and my sister advised me to apply for the pageant with faith that I could win. I was not convinced but I had two things in mind. Firstly, the experience that I would gain, either I won or lost the pageant. Secondly, the impact I would like to make with the platform. Being a queen is not just about the title. I told myself that if I won, it would give me a bigger platform to showcase what I had been doing― promoting my culture and community development.

It was a very rigorous exercise and I was really impressed. We were camped for just four days and we worked very hard. Our dance and catwalk instructors put in their best for us. About 90 per cent of the ladies who contested the pageant had never been involved in pageantry before. So, they had to train us. We worked around the clock, and at times, we only slept for a maximum of four hours. I am happy that I gained that experience.

Being crowned Miss Oyo was a dream come true for me because I’m a very shy and reserved person. A few years ago, I would never have participated in a pageant. This is me outside my comfort zone, hence winning is a big deal for me. I appreciate the organisers for giving me the opportunity to participate, as well as family members and close friends who encouraged me tirelessly. It is a testimony to the fact that if one aims for something and is ready to put in work, one can achieve it.

I intend to use this platform for community development projects, especially on culture and humanitarian concerns such as rape, HIV and physical disabilities.

Everybody has something to say and I am not ignorant of that. When I won, I saw a lot of insensitive comments. Some people asked, ‘What is beautiful about her’? Some said, ‘She won because she is the daughter of the Alaafin of Oyo’, and so on. However, I am not bothered. Interestingly, my father was not even aware I contested this pageant until I won. The judges did not know who I was and I did not know any of them. When I was in camp, I did not reveal my identity to anybody. The Miss Oyo pageant has been on for about 18 years and this is the first time a princess would win. I believe the pageant is very free and fair. One would win if one has what it takes to do so. I deserved to win because I am from Oyo State, and I’m also intelligent and beautiful. Winning had nothing to do with my linage.

However, my father was very happy when he learnt that I won the pageant, and he is proud of me.