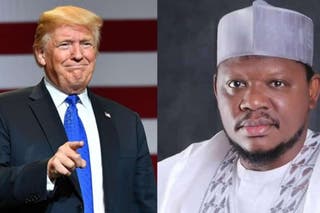 Former presidential aspirants Adamu Garba, has urged Donald Trump to join his social media app after Twitter and Facebook banned the US president from their platforms.

Facebook and Twitter took the extraordinary step on Wednesday of locking President Donald Trump’s account on their platforms after his supporters stormed the Capitol building to protest the election.

In a statement made by Zuckerberg on Facebook, he said that the shocking events of the last 24 hours in US has shown that Trump has intended to use his time in office to “undermine the peaceful and lawful transition to power to Biden”

Reacting to the report, Adamu Garba, offered the 45th president of US to join his social media app, Crowwe if he so wishes.

”Yes I love Trump. He can join Crowwe if he so wish. But I am disappointed in his final days activities.

He might be repentant and Crowwe always give second chance to people who chose to amend.”