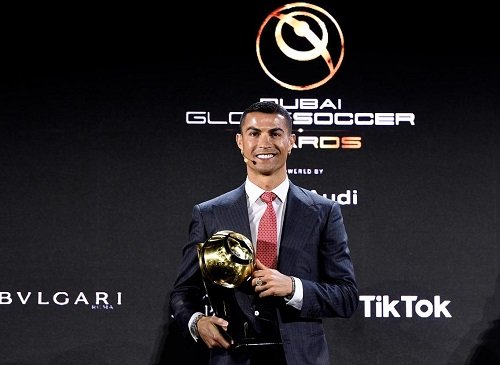 Juventus forward, Cristiano Ronaldo has been named the Player of the Century.

The award was given to him by Dubai’s Globe Soccer Awards.

Ronaldo has secured the award with 33% of the vote, whilst Barcelona great Messi had 20%.

Just six players ended up with a vote of 2% or more, in chronological order they were; Ronaldo, Mohamed Salah, Messi, Ronaldinho, Robert Lewandowski and Zinedine Zidane.

The Globe Soccer Awards are a creation that are now brought forward with backing by the Dubai Sports Council, and on this occasion are powered by car manufacturer Audi. Ronaldo has previously won Globe Soccer’s Player of the Year award six times, whilst Messi has won it just once.

“Being here with great champions such as Robert Lewandoski, Gerard Pique and Iker Casillas is amazing,” Ronaldo said.

“Iker is an incredible example for everyone, when he had his problem, he made us understand that we need to value what we have. I am 36, but I still love football, my life and my family,” he added.

“This award is giving me motivation, it’s amazing to be part of this event, this is a big honour for me. I hope the pandemic will be over next season and more people will be here. Thanks for his trophy, I am really happy. I hope I can continue to play for a few years.”


Meanwhile, Bayern Munich’s Hans Flick has won the Coach of the Year award ahead of Gian Piero Gasperini of Atalanta.