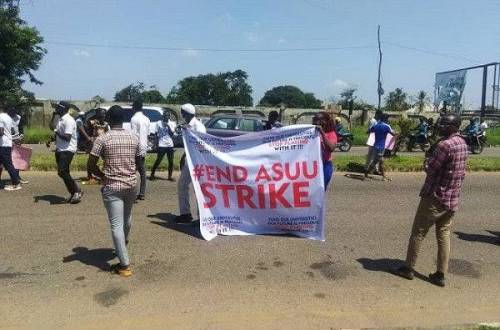 Kikelomo Arowosere, a 300-level student in a Nigerian University, stared into space as many random thoughts crossed her mind. She has been forced to stay put in her house for months due to COVID-19 pandemic and the lingering ASUU strike.

Kikelomo had decided to learn some culinary skills pending the time the ongoing strike by university teachers in Nigeria is called off. But she has been unsettled since the landlord of her rented apartment in school called to ask her to pay her rent or move out of the house.

Just like Kikelomo, many other students of tertiary institutions in Nigeria, who stay in rented apartments, are in a spin over the lingering strike embarked upon by the Academic Staff Union of Universities (ASUU).

As the hope of resuming school gets dimmer, students are getting calls from their landlords or agents on campus to either renew rent or move their things from the rented apartments.

The National Association of Nigerian Students (NANS), while calling for a truce between the government and the teachers, described the strike as "the most prolonged industrial action embarked on by the university lecturers."

While the strike has delayed the graduation of many of the students, some are dealing with pressures from their landlords in their varsities to renew their rent or pack out.

Most students currently live with their parents, ar away from their universities. According to them, paying rent for an apartment in the university environment sounded like a waste of money as the strike lingers.

A postgraduate student of the Department of Linguistics, University of Ibadan, Essien Udeme, told SaharaReporters that she paid N200, 000 as rent for one year and only stayed for six months in the apartment before the 'break'.

She said: "The strike happened around March and I had to travel, so my rent expired in July this year. The landlord called me to renew my rent agreement. I wanted to, but on second thought, I decided against it because I felt like it would just run for nothing."

The young lady said she was, however, disturbed with calls every day, reminding her to move out or pay the rent. She had to ask a friend to help her move her things from the apartment.

"They called every day to remind me of the expiration date, and I had to call a friend to help me move my things. They don't care if we are on strike or not. For them, everything is business."

Speaking with SaharaReporters, a final year student of the Department of Mass Communication, Victor Akuma, said his landlord had not been a pain in the neck like others but could not tell if he had to forgo the rent he had paid.

"My rent is N60,000 yearly, and before the wave of the pandemic, I paid an advance fee of N30,000, since there's no strict rule we must pay in full. I have not stayed in the lodge for up to 3 months and I still have three months rent left, wasted with the strike."

He says the landlord could be mean but believes he understands the state of things; hence, the reason why none of the tenants had received a call to come and renew their rents.

"I and some of my lodge mates communicate with the landlord to see if he would have to forgo this year's rent and start counting from next year, but he said until we return. We don't know what he has to say yet."

Tosin Orodiran, a postgraduate student of the University of Ibadan, said although the landlord had not called the students in his lodge to pay rent, every one of them was sure of paying new rents when school resumes.

A student of Business Administration at the University of Nigeria, Enugu Campus Victory Chiagozie, shares a similar view.

Chiagozie said that her rent is about N120, 000 a year which is shared among her roommates.

"For months now, we've been at home, but the rent is either almost exhausted or already exhausted. I can't remember when we paid the rent but the major part of this year has been somehow our rent is gone, we will have to start a new payment when school resumes," she said.

Similarly, Chionso Egwuom, a student of the Federal University of Technology Owerri said he pays N75,000 yearly as rent and had paid the last rent in March when the strike started coupled with the COVID-19 pandemic.

"I delayed the payment because I couldn't pay in January so I paid in March and it expires at the end of December. I paid barely two weeks before the strike."

He added that his landlord had just recently called to inform him that when the rent expires in December, he would have to renew the lease by January.

"And yes he has informed me that it expires this December and he will collect another rent by January. But if the strike has not been called off by then, I won't pay," he says.

Landlords are not happy with the strike. They, however, maintained that the strike would not change their minds about collecting rents for the new year.

Speaking with SaharaReporters, a landlord in Ile Ife, Osun State, Mr Komolafe, said the students had to renew their rents or pack out to other places because "these houses are the means of livelihood for most landlords."

"We don't have any option either. You have to pay if you don't want to pack out. It is not about ASUU. It is about our means of livelihood," he added.

Another house agent in Lagos, Prince Williams said it is in the law for house owners to demand a renewal of rent from their tenants once the rent expires, whether or not there is an ASUU strike or not.

According to him, the ASUU strike does not stop landlords from demanding a renewal of rent.

"Whether you are physically present in the house or not. As long as you keep your property inside that room, you are meant to pay and if you can't, you should move out of the house. It is an investment and it is meant to yield dividends for the owners," he said.