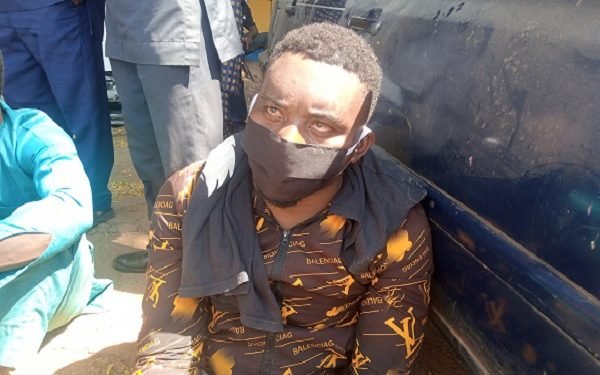 Charles Thomson
Charles Thomson, an Army Corporal, who ran away from the theatre of operation in the North-eastern part of the country, has confessed killing his own mother, The Nation reports.

Corporal Thomson was among the 82 suspects paraded by the Kaduna State Police Command for various criminal acts in Kaduna on Thursday.

The 30 year-old suspect, who confessed to the alleged culpable homicide of his mother, told The Nation, that he stabbed his mother to death because she was a witch, adding that, his mother use to turn to a serpent at night.

According to him, “I was arrested for culpable homicide, because my died in my hands while fighting with her. We were fighting as a result of spiritual dispute; I saw her turning to a serpent severally at night, so, it angered me.

“She was even appearing and disappearing. And when I went into her room, I saw her with a 10 year-old boy running around her. That was what led to the fight,” he said.

Asked about his father, the young Thompson said, his father abandoned him and his only brother with their mother about 20 years ago.

“I am presently on sick leave, because am incapacitated, I was injured, I fell during an attack in Maiduguri. I am not a dismissed soldier, I am still serving.”

Thompson also blamed the incident on lack of love between him and late mother, saying that his mother use to speak ill of him in the midst of people.

“We had always had problems, there was no love. She didn’t have love for her children. So, I want to advise parents to always give assistance to their children and speak well about them in the public,” the suspect said.

Meanwhile, the police said their investigation has revealed that, Thompson is on AWOL, that is Absence Without Leave, contrary to his claim that, he is on sick leave from the Army.