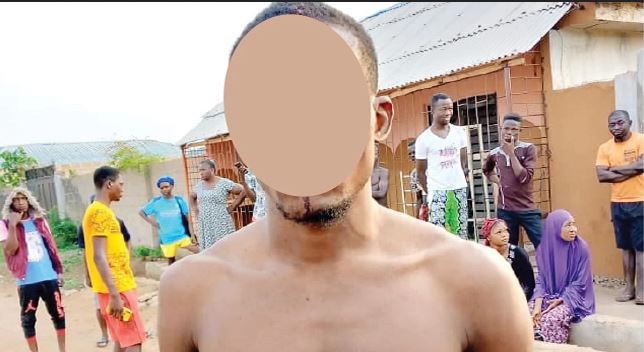 Photo credit: The PUNCH
According to a report by The PUNCH, some residents of Abule-Ijoko, in the Ifo Local Government Area of Ogun State have overpowered a robber.

The residents turned the tables on a five-man robbery gang that attacked them during the week, killing one of the robbers.

City Round learnt that the robbers armed with a locally-made gun and cutlasses ransacked two apartments occupied by some youths on Tuesday night, dispossessing them of phones and laptops.

It was gathered that one of the victims mustered the courage and confronted the robbers when they wanted to cart away his clothes after collecting his phone.

Other victims were said to have joined in the resistance, leading to commotion which awoke other neighbours.

Our correspondent learnt that the robbers fled the scene with the loot but one of them was not lucky as he was held and beaten to death.

The case was said to have been reported at the Agbado Police Station and a team led by the Divisional Police Officer, SP Yero Kuranga, went to the scene to recover the corpse.

One of the victims, who spoke to our correspondent on condition of anonymity, said the incident occurred around 11.30pm when one of his roommates went out to put off the generator.

He said, “We are four living in the room. The generator was on while we went to bed. The power was restored around 11.30pm and one of my roommates went out to put it off. He didn’t know that the robbers were already inside the compound.

“There are three doors to our apartment. He closed the one next to the room while he was going out and kept the two others open. As he wanted to put off the generator, they attacked him with cutlasses and injured him. They asked him to lead them to the room.

“One of the robbers hit me on the head with the butt of his gun. They collected our phones and laptops and went to the next room. They collected phones from the two residents there. They wanted to start packing clothes when one of the occupants confronted them. That gave us confidence and we also supported him to attack the robbers. They fled immediately but we were able to hold down one of them.”

The victim denied that they killed the robber, claiming that he vomited blood and died after revealing two names of his gang members.

He added, “The robber told us that it was some people around the community who gave them information about us. They injured four of us. One of my roommates was shot. They were five and only one of them carried a gun.”

Another victim explained that when they called the line in one of the stolen phones, a robber picked it and mocked his gang member caught during the operation.

The resident said, “He told us that the deceased robber was not smart enough and that is why he died. We reported the case to the police. We did not beat him. He didn’t want to reveal the identities of his gang members, saying that he was on oath. But we compelled him to mention them. He vomited blood and died after mentioning two names.”

The Police Public Relations Officer in the state, SP Abimbola Oyeyemi, confirmed the incident, adding that no arrest had been made.

He said, “We learnt that one of the robbers was beaten to death and a police team rushed to the scene. His corpse was met at the scene by the time the police got there. The robbers injured their victims.”

Meanwhile, one Garuba Ibrahim has been arrested in Ope-Ilu, also in the Ifo council area for allegedly being in possession of a locally-made gun and 10 live cartridges.

He was reportedly arrested on Sunday while loitering around a hotel in the community.

Oyeyemi, while confirming the arrest, said Garuba was under investigation.

He said, “He was arrested with a locally-made gun with 10 live cartridges. He said it was someone who gave him information that a resident in the area was hiding a gun. He said he went to the house to recover the gun and when he got there, he didn’t meet the resident. We are questioning him to know why he didn’t inform the police before he decided to recover the gun all alone.”