Miracle! After 21 Years Of Crying For A Child, Husband And Wife Welcome Triplets (Photo) 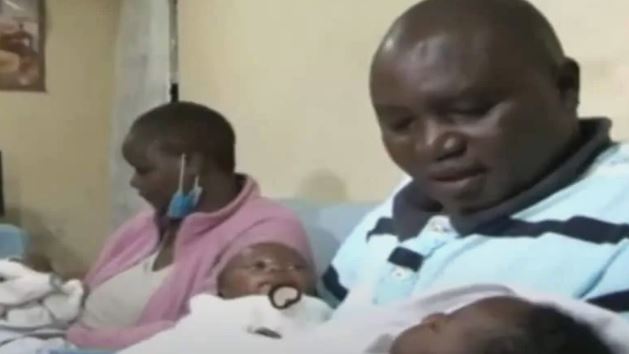 Florence and her husband can now smile again
A Githurai couple Florence Makena and her husband John Gitobu have been left overjoyed after welcoming triplets. The couple had waited 21 years to have a child.
The two from Kenya have stuck by each other through thick and thin had all the love in the world but no children to share it with.  But God smiled at them and granted them not one, not two but three children all at once after being childless for more than two decades.
“After 21 years, God has decided to bless me and shine his light on me. I became pregnant and delivered three children,” Florence told KBC. But this does not mean the two never tried to expand their family before.
The first time Florence was with a child, her little one was breached during delivery and the baby sadly lost its life. The mum went through an operation and the lifeless baby was taken out. Three more years passed and the couple did not see any signs of pregnancy. That is when the pair realised they needed to take drastic measures.
“We stayed for long and used a lot of money to a point we had nothing. We are in debt and owe over KSh 300,000 (N1,084,815.67),” John said. Florence gave birth to three healthy boys and named one of them Miracle, to thank God for the fruit of the womb.