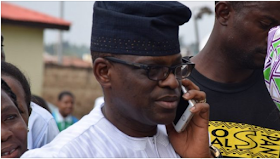 Eyitayo Jegede, a former commissioner for justice and attorney-general of Ondo state, has clinched the ticket of the Peoples Democratic Party (PDP) for the October 10 election.
Jegede polled 888 votes to defeat Agboola Ajayi, deputy governor of the state, who had 657 votes.
Eddy Olafeso, former south-west chairman of the party, came a distant third with 175 votes.
Bode Ayorinde, another aspirant secured 95 votes while Banji Okunomo, polled 90 votes and Boluwaji Kunlere, 33 votes; Olusola Ebiseni, 29 votes and Godday Erewa got 14 votes.
The election took place at The Dome in Akure, the state capital.
Jegede, who was the candidate of the PDP in the 2016 governorship election will face Rotimi Akeredolu, the incumbent governor.
Akeredolu clinched the ticket of the All Progressives Congress (APC) on Monday.
He had defeated Jegede in 2016.