Drama As Police Chase Out Staff At APC Headquarters In Abuja 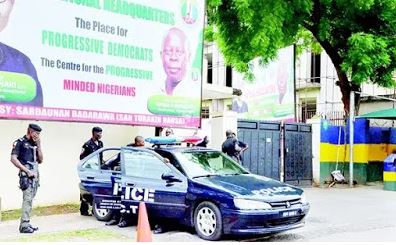 Drama As Police Chase Out Staff At APC Headquarters In Abuja

The Nigerian police have chased out staff of the All Progressives Congress at its national secretariat in Abuja, as they sealed off the office for the second time this week.

Office staff, who had arrived early, were asked to leave

According to The Nation, the Inspector General of Police ordered the police action, a few hours to the commencement of the virtual NEC meeting of the party, convened by Victor Giadom.

Victor Giadom, a sacked member of the National Working Committee (NWC) on Wednesday got President Muhammadu Buhari’s backing to convene the NEC meeting.

The meeting will hold virtually from the Presidential Villa from 12 noon..

The Senator Abiola Ajimobi led NWC has faulted the meeting as illegal.

The NWC members said they would not attend the meeting.