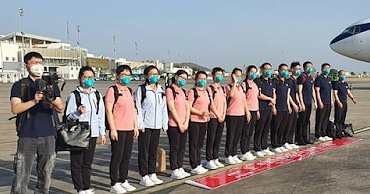 The Peoples Democratic Party has accused the Federal Government of betrayal and cover-up in the activities of a 15-man Chinese team that arrived in the country on April 8.
It demanded an “immediate apology” from the government “for taking the citizens for granted” by declaring not to know its whereabouts after it accorded it a state reception.
In a statement issued on Tuesday by its National Publicity Secretary, Kola Ologbondiyan, the party said the FG should account for all the donations and gifts it had received from local and international bodies since the start of the pandemic.
The statement read in part, “The conduct of the Federal Government in disclaiming the Chinese team and declaring that it cannot account for their whereabouts after it had accorded them state reception had further exposed the dishonesty, lack of transparency and inherent corruption that pervades the APC administration.
“The declaration by the minister of health that the government cannot account for the medical team it officially received, directly triggered the public alarm and raised suspicion of clandestine designs against our nation.
“Our party believes that the health minister’s conduct betrayed a plot by certain officials of the Federal Government to deceive Nigerians and ostensibly distract public attention from the acts of corruption being perpetrated in the fight against COVID-19 in our country.”
The Minister of Health, Osagie Ehanire, had said during a Presidential Task Force on COVID-19 briefing that the team was not the “guest of the Federal Government but that of the construction company”.
Also, the Managing Director, China Civil Engineering Construction Corporation Nigeria Ltd, Michael Yigao, said on Monday that the team was in the company’s care and it would be leaving Nigeria soon.
“Right now, commercial flight to China is not open but when flights are open again, we’re considering the team going back to China,” he said.