‘If I have any romance with Kwam1, may all Oyo oracles and spiritual mothers punish me’ – Alaafin of Oyo’s estranged Queen 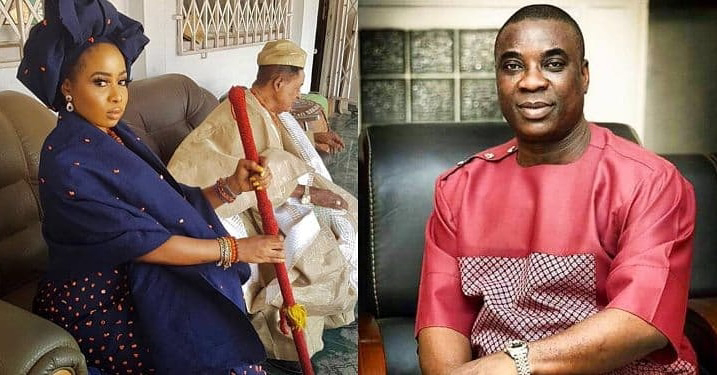 One of the wives of the Alaafin of Oyo, Queen Ola, has put her life on the line in defense of herself amidst rumor that she was kicked out of the palace over her romance with Fuji maestro , KWAM1.
In a call-in-program today, the Queen swore with all the oracles in the palace and all spiritual mothers of the world that she had nothing to do with the musician.
According to our inside source, Queen Ola has indeed left the palace on her own volition and it was over a totally different issue.
The source alleged that: “Badirah was looking for freedom as it wasn’t rosy in the palace. She was only making money from people that give the queens money whenever they needed access to the king.
She and her bestie – who is also Alaafin’s wife – Queen Omoh, recently had issues which later became messy. Badirah knew she was in trouble when the king recently went on a medical trip and took all his young queens except her.
She wanted to leave while he was away but he had instructed the palace guards and senior queens not to allow her leave. She was also stopped from representing the king at certain events.
She has been packing her belongings in bits out of the palace without anyone knowing. The day she finally left, the Alaafin had requested that no one should entertain visitors during the lockdown but queen Badirah invited one of her friends and hid her in the palace.
The king found out and asked her to tell her friend to leave or he would ask both of them to leave. That was the golden opportunity she was waiting for, so she packed her remaining items and left the palace with her friend.
Currently, the palace is filled with tension as the king has sent words to her father, informing him that his daughter has left the palace and he has no idea of her whereabouts.” The Queen has also removed all references to the palace from her IG bio.