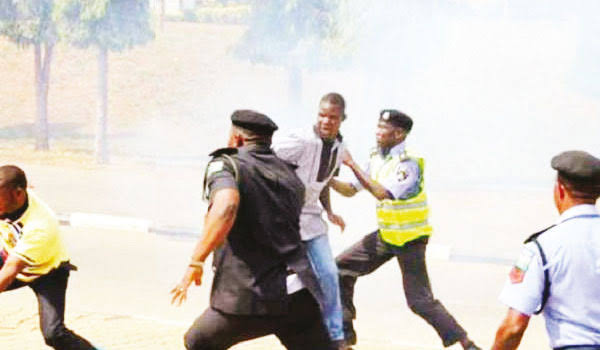 According to Sun News, as part of efforts to curb the spread of coronavirus, a task force comprising security operatives on Thursday dispersed traders at the popular Owode Market in Ede North Local Government Area.

The move was against the backdrop of government’s directive that all weekly markets be shut till further notice as a part of efforts to curtail the spread of the pandemic.

The security operatives swung into action, when they discovered that traders and their customers floated the order as they gathered for business transaction as usual.

The council chairman, Mukaila Uthman, who arrived at the market as early as 6:00 am to monitor the level of compliance and educate violators on the need to adhere strictly to the government’s directive, persuaded them but they refused to comply.

But officers of the Nigeria Police and Nigeria Security and Civil Defence Corps led by the DPO, Ede Division, CSP Akanni later dispersed them.

The chairman noted that the closure of the market became necessary to avoid contact with people from neighbouring states that have cases of the COVID-19.

Uthman insisted that the directive must not be compromised, especially with the recent confirmed case in the state on Wednesday.

He added that all hands must be on deck to ensure that the disease is not spread in the state.

While commending Governor Adegboyega Oyetola for putting precautionary measures in place, Uthman enjoined the market women to support government’s effort in curtailing the spread of the disease by ensuring regular hand washing and personal hygiene.

“Here in Owode market. We held a meeting with Baba Loja and Iyaloja based on the instruction given by the governor last week that the only proactive measure we could use is for us not to allow people to gather anywhere in the state but our people don’t want to listen despite the explanation.

“Government have tried their best and we are still on it. Our people are still not getting it right. We disperse them with the help of our security personnel. The lives of our people is our priority and we have to continue until they obey us.”