Exposed! See The Father Of 4 Kids Who Uses His Sienna Bus For 'One Chance' Operation (Photo) 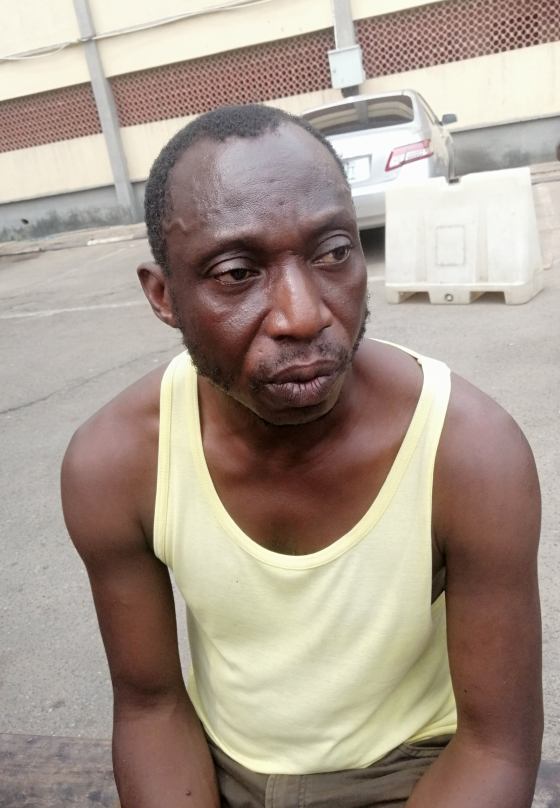 A 50-year old, leader of a one chance robbery gang, Matthew Tokeme


Vanguard reports that a 50-year old, leader of a one chance robbery gang, Matthew Tokeme who is currently being investigated by the Lagos State Police Command has revealed that he started operating a one chance syndicate two weeks ago.

According to the father of four, who uses his sienna bus with registration number APP488FH, “I live in number 2 Olawoye street, at Sango. My friend bought the sinnena bus for me to use for transportation but I started using it for one chance.”

We are three in number who usually go for operations. We ply Abule egba Ifako Ijaye route between five to six in the morning when workers and traders are going to their place of work. We pick passengers at the bus stop.”

Explaining further, Tokeme said ”for instance passengers who are going to Victoria Island board our vehicle when we get to a particular location we stop and disposes of the victims their valuables. We don’t use guns, if the victims are very stubborn we threaten them till they part with their phones and laptops. We carry only one passenger at a time while my gang members sit like passengers.

The second operation I got a labtop and phone. We didn’t collect money from anyone because she was having just N700.
I sold the phone N5, 000 while the laptop was sold N20, 000.

We are three who usually go for the operation. I don’t know where my gang members stay colleagues. I communicate with them through the phone. I have given the police their phone numbers but they can’t get them. We don’t know each others house we only meet at the bus stop.

Confirming the arrest the spokesperson Lagos state police command DSP Bala Elkana said that “the suspect Matthew Tokeme was arrested after the police received information from members of the public that some armed robbers were sighted along Agidingbi road operating in a Toyota sienna bus attacking and robbing unsuspecting victims of their valuables”.

“Sequel to the receipt of the information operatives from the Rapid Response Squad swung into action, the vehicle was intercepted and the suspect arrested. Investigation is ongoing to apprehend other gang members at large”.