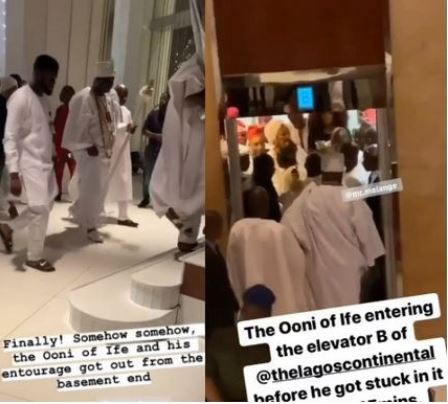 The scene of the incident


There was anxiety on Thursday night as the Ooni of Ife, Oba Adeyeye Ogunwusi, got stuck inside a lift at a popular hotel on Victoria Island in the Eti Osa Local Government Area of Lagos State.

Saturday PUNCH gathered that the Ooni was at the hotel to watch Queen Moremi. The Musical Reloaded; a stage play produced by the House of Oduduwa Production. The monarch attended an earlier production staged in April, last year.

The latest production ran from December 24, 2019 to January 2, 2020 and shown between 3pm and 7pm. But Oba Ogunwusi chose to watch the last show and on arrival at the hotel, he was ushered into the lift together with his entourage.

One of our correspondents gathered that the monarch’s entourage numbered about 20 but only some of them were with the monarch when he was trapped in the lift.

It was reliably learnt that there were apprehension and drama at the hotel lobby as one of the foremost traditional rulers in Africa was stuck for about 20 minutes in the lift.

A video that went viral on social media on Friday showed some of his aides and admirers shouting at officials of the hotel in anger and frustration to quickly rectify the faulty lift.

Some of them were heard saying, “He (Ooni) is there, he is stuck. We have been calling them and they keep saying they are working on it. What is that?

“He has been inside the lift now for 15 minutes and he is stuck. This is a bad thing for your hotel and you call this a Five-star hotel.”

At a point, some of the agitated aides of the Ooni were seen peeping and looking at the monarch and his other aides inside the faulty lift from one of the floors.

Oba Ogunwusi was seen in the same video using the staircase after coming out of the faulty lift. He later addressed the audience at the stageplay although what he said could not be heard due to the poor audio quality of the video.

The Director of Public Affairs of the Ooni’s Palace, Mr Moses Olafare, when contacted confirmed the incident.

Olafare said the lift developed a fault and Oba Ogunwusi was inside it for about 20 minutes. He, however, added that the monarch was unruffled throughout the period.

He said, “It is true, kabiyesi was stuck in the lift for about 20 minutes. That incident made people there to be apprehensive and there was drama there.

“The lift developed a technical fault when the Ooni was inside but the fault was rectified eventually by the technical department of the hotel and he came out.

“The hotel management tendered profuse apologies. Kabiyesi cracked jokes with the management of the hotel and asked them to improve on their facilities if they wanted to remain relevant in the Nigerian hospitality market.

“Kabiyesi calmed those who were already panicked. He asked them with a broad smile, ‘why are you panicking? Everybody became calm after that.

“He watched the play after that. It is not that he just went there to watch the play. The play, Moremi Musical Reloaded, is part of his projects. It is one of the projects of Moremi Ajasoro which he does every year.

“He is on his way back to Ife now (on Friday). It was not something very serious. The lift was faulty and some people were suspecting a foul play. They thought it was deliberately done to harm kabiyesi but that was not the case, it was a technical fault. The lift was said to have developed a similar fault on Thursday morning and it was the second time that kabiyesi was trapped inside. But there is no cause for alarm, kabiyesi is okay.”

In 2017, Oba Ogunwusi erected a statue in honour of Queen Moremi in his palace. The courageous Moremi, who lived in Ile-Ife in the 12th century, was married to Oranmiyan (heir to Oduduwa believed to be founder of Yoruba race).

Saturday PUNCH’s efforts to speak with the hotel management were futile as calls made to the mobiles on its website were not answered. When one of them was eventually answered as of 8pm, the receiver refused to comment on the matter.