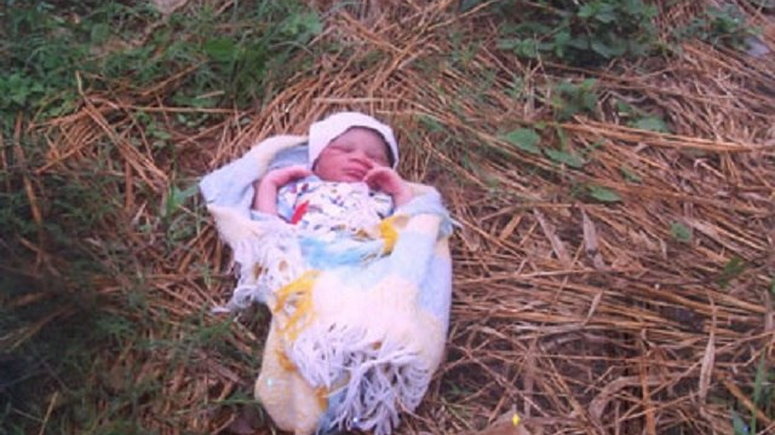 Hajiya Fatima Adamu has rescued a day-old baby girl dumped by an unidentified mother by the roadside along Kuta Road, opposite Central Mosque in Minna, Niger.

The News Agency of Nigeria (NAN) reports that the baby was brought to the Niger State Child Rights Protection Agency office in Minna on Tuesday.

Adamu while speaking to NAN said that the baby who was wrapped with a wrapper and dumped by the road side was discovered by some children playing around the scene.

According to her, she was called by her neighbours to the scene where the baby was dumped.

She said that when she got there, she saw people gathered around where the baby was dumped.

“I inquired from them and they told me that an unknown woman disembarked from a motorcycle and dumped the baby there.

“Everybody at the scene was afraid to touch the baby.

“They said that they did not see the woman that dumped the baby but the children that were playing around the scene saw her.’’

She added that the children said that the woman disembarked from a motorcycle and dropped something on the ground that was shaking.

“It was the children that immediately informed their parents but before they could come out from their houses, the motorcycle had zoomed off with the woman.’’

Adamu said that the women quickly alerted others within the neighbourhood about the development.

She also said that a member of a local vigilance group living in the area helped her to pick the baby from the spot.

She added that they then reported the matter to the Central Police Station.

“The police officer on duty collected the baby and promised to bring the matter before the Child Rights Agency that handles issues about children and women’s welfare, “she said.

Also, a police officer, Mrs Hassana Usman, who was on duty at the station, confirmed that the woman and a member of a vigilance group brought the abandoned baby to the police station.

Usman added, “When they came to the station with the baby, I noticed that the baby had not been bathed after birth.

“It was as if the mother just gave birth to the baby and immediately dumped her at the spot where she was rescued.

“I appealed to a woman that was living close to the police station to assist me with hot water.

“I bathed the baby because I suspected that she had been left in the cold and was not feeling well.’’

The female police officer added that she had to take the baby to the hospital on Sunday since those who brought her to the station did so on a Saturday night.

She said, “The baby has been under my care since that Saturday night and have to bring her to the Child Rights Agency office on Tuesday, “she said.

Mrs Mairam Kolo, the Director-General of the Niger State Children Rights Protection Agency, appealed to the general public to assist the agency with useful information on the identity of the mother of the baby.

“We are calling on anyone, especially, those living around the area where the incident happened to assist the agency with useful information.

“Also, any member of the public that knows any woman who was pregnant; and was delivered of a baby in the last three days but has not been seen with a baby to report to our agency.

“This will enable us to identify the mother and bring her to justice,” she said.

Kolo said that the agency would work with the police and the Ministry of Women Affairs to investigate the matter.

She commended the woman for saving the life of the innocent baby.