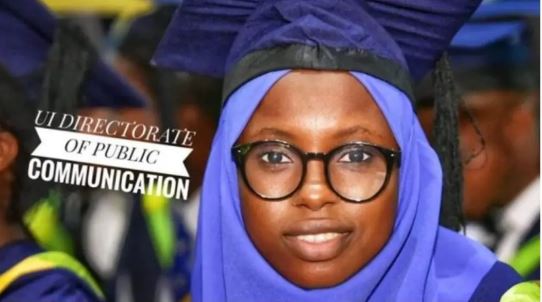 Abibat Olayinka Owolabi, the child of a plank seller at the Bodija Market in Ibadan, the Oyo state capital, Mr. Aliu Owolabi, has emerged as overall best graduating Master’s Degree student at the University of Ibadan.

Miss Owolabi graduated from the Department of Botany, Faculty of Sciences in the institution.

DAILY POST reports that Abibat, a 25-year-old indigene of Ibadan recently had her traditional marriage ceremony.

Vice-Chancellor of the university, Professor Abel Idowu Olayinka announced yesterday in Ibadan, the Oyo state capital during the convocation ceremonies of the university that Owolabi graduated with a CGPA 7.0 to emerged as the overall graduating student in the institution.

Olayinka stated that with Owolabi making a perfect Cumulative Grade Point of 7.0, she is declared as the overall best among the graduating candidates of Master’s degrees at this year’s Convocation. 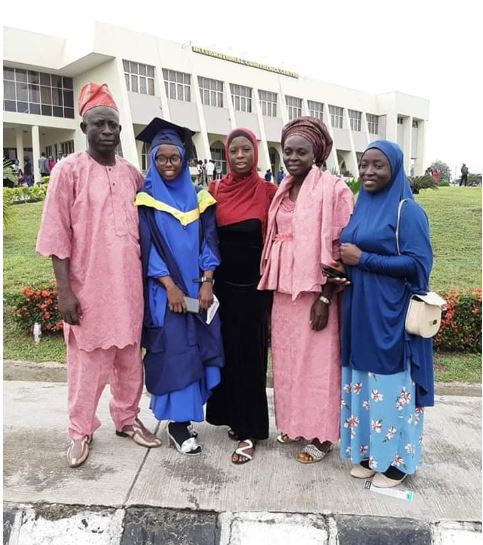 Abibat Olayinka Owolabi and her family


Owolabi is the third of five children and the first to earn a Master’s Degree among the children of her parents. She equally lauded her parents, Mr and Mrs Aliu Adisa Owolabi for their supports, pointing out that without them, she could not have gone this far in life. She attributed her success to her creator, saying that if not God, she would not have made the grade.

According to her, though, life was tough because her background was humble, all along, she put in her best in whatever she did, stressing that hard work and faith in God were the secrets behind her success in life.

“But I must tell you my parents really supported me. At a point when they were getting tired, and there was no money, my mentor, Professor Egunyomi Adeyemi, a retired professor came in. He took up paying my school fees and helping me in other ways. Alhamdulillah, here I am today, I give all praises to God.