Young Man, Terry Who Claimed He Was Hired To Assassinate Regina Daniels, Arrested By Police 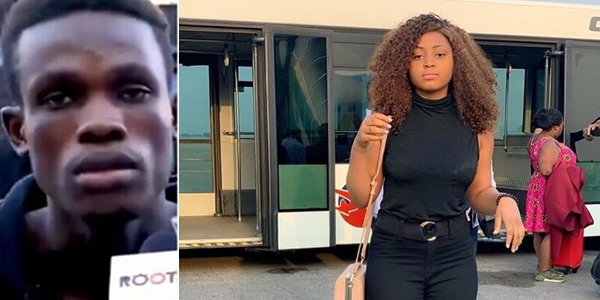 According to reports, a man who claimed he was hired to assassinate Nollywood actress, Regina Daniels was on Sunday arrested by men of the Nigeria police for attempted fraud.

The young man identified as Opoma Terry who recently got back from Ghana, was arrested for trying to defraud Ned Nwoko, the billionaire husband of the screen goddess.

The suspect while confessing to the crime of fraud, stated that, at first, he tried defrauding Chief Ned the sum of N700, 000 after claiming he was hired to assassinate thw young wife of the billionaire, Regina but along the line had a change of mind and started opening up of his intentions.


Ned Nwoko reportedly, played along with the suspect, and requested for his account details for the said money and made a transfer of N400k to him.

But before then, he already alerted the bank management and security operatives about the said incident. The suspect was arrested on his way to make the withdrawal.