Angry Girlfriend Ties Her 'Abusive' Boyfriend Up In Bed, Stabs Him With Bottle In Delta 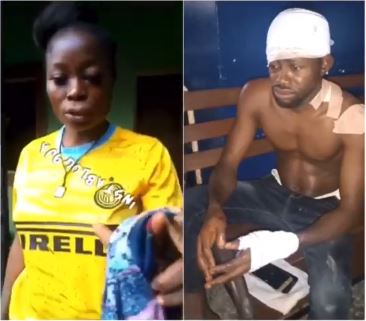 The lady stabbed her boyfriend

It has been reported that a young woman has been arrested for tying up and stabbing her abusive boyfriend, Chidi, in Sapele, DeltaState.

Local reports show that the incident happened around 2a.m, on Friday.

Talking about the incident, the young woman said she took the action following a serious beating she received from him before they went to bed.

She added that she decided to tie Chidi up so that she could leave without being beaten again, but he woke up before she could tie his hands after already tying his legs.

However, in the course of another fight that broke out after Chidi woke up, the lady broke a bottle and stabbed him with its shard in self defense. .

The boyfriend was subsequently rushed to the hospital, while the suspect was arrested.