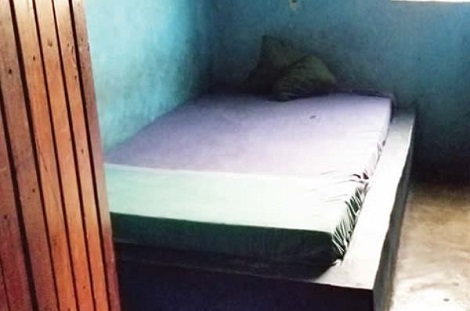 A yet-to-be identified woman is on the run after her sexagenarian lover, Raji Adio, died while they were allegedly making love in a room at the River Bank Hotel in the Ijora-Badia area of Lagos State.

PUNCH Metro gathered that the 60-year-old Adio, visited the hotel, located at No. 89 Gasikiya College Road, Ijora-Badia, in company with the fleeing woman and requested a room for a short-time rest.

After paying, the manager of the hotel, Williams Ekezie, released the key to one of the rooms, and when Adio and the woman had settled down, the manager left the premises to attend a morning devotion at the Revelation Church opposite the hotel.

It was learnt that a cleaner at the hotel, John Chuks, saw the woman running out of the room, but before he could alert his co-workers, she had disappeared.

When our correspondent visited the hotel, Williams said the woman escaped because Chuks, rushed to the church to inform him of what he saw instead of chasing after her.

The manager stated, “Both Adio and the woman were regular customers, so on the day of the incident, they both came around 8am to book a room for short-time rest. Immediately payment was made, I issued a receipt to Adio and gave him the key to one of the rooms. Afterwards, I left the reception to attend a morning devotion at a church opposite the hotel. Almost all members of staff of the hotel attend the devotion before business will commence for the day.

“As the devotion was going on, Chuks suddenly rushed to inform us that he suspected that something strange had happened because of the way a woman rushed out from one of the rooms and ran out of the hotel. We quickly chased after her, but it was too late.

“If someone was at the reception, the woman wouldn’t have escaped, because the receptionist would have asked for Adio when the woman was leaving. But the cleaner, who was fortunate to have seen her while running away, came to call us instead of chasing after her to prevent her escape.

“When we went back to the room to find out what had happened, we saw Adio lying naked on the bed and on close examination, we realised that he was dead. We also found the tissue paper that both of them used during their romp on the floor, while the man’s clothes were on the table. I suspect that the woman quickly dressed up and rushed out of the room after Adio died.”

After efforts to ascertain the woman’s whereabouts proved abortive, Chuks said the matter was reported at the Ijora-Badia Police Division and detectives were sent to investigate the matter.

“I don’t know if it was a tricycle that she boarded or a motorcycle, but I searched for her everywhere but did not find her. The woman is slim and tall, but no one could pinpoint her whereabouts. So, when I got back, I was told that Ekezie had gone to report to the police and police personnel later visited the hotel to investigate the matter.”

PUNCH Metro learnt that Ekezie was arrested and detained in connection with the incident, but he was later released and had been visiting the police station daily as part of the investigation.

When contacted, the state Police Public Relations Officer, Bala Elkana, said a manhunt had been launched for the woman, adding that investigation was ongoing to determine if Adio died while having s*x, or if something else was responsible for his death.

Elkana stated, “We started by deploying our homicide detectives in the crime scene; they cordoned off the place to see if there was anything that could aid the investigation, because we are not sure if it is murder or not.

“So, we can’t conclude from the onset and that is why we have commenced investigation into the matter and launched a manhunt for the woman. We are leaving no stone unturned to arrive at the truth about what actually happened, because we want to ascertain if it was a death caused by him having sex or whether something else was responsible for his death; so, we are still investigating.”