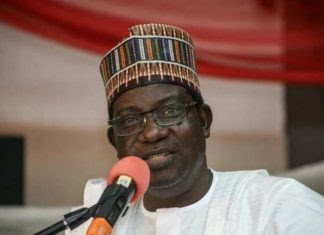 Governor of Plateau State, Simon Lalong has explained that his belief in the independence of the legislature informed his decision not to interfere in the affairs of the Plateau House of Assembly.

Lalong, who served as Speaker of the state legislature during the reign of the former governor, Chief Joshua Dariye, charged state legislative houses to always advocate their independence for effective governance of states.

Speaking on Sunday, in Abuja, at an award ceremony organised by Conference of Former Speakers of State Houses of Assembly, COFSSHA, which he heads as Chairman, the Plateau State governor urged former Speakers of state legislative houses not to shy away from making their contributions in strengthening the state legislatures.

“We must continue to lend our voices to various issues in our polity in order to ensure that the democratic culture is deepened and our people truly experience and harvest the dividends of democracy.


“We cannot shy away from making our contribution to national discourse such as the one relating to strengthening the State Houses of Assembly in such a manner that they will work independently but in collaboration with the executive and the judiciary to ensure good governance and development in our states.

“I am happy to say that in Plateau State, that synergy and collaboration is happening because of my experience as a former speaker and now a governor, where I have supported the House of Assembly to function without any interference and in turn, they have supported us to deliver on our Rescue Mission,”he said.

Noting that Nigeria’s democracy had continued to grow amidst many challenges, he challenged the former leaders of the State Houses of Assembly to come forward with their contributions with a view to overcoming the challenges, given their experiences with people at the local level.

“Our democracy has continued to grow amidst challenges that we all have to put our heads together to overcome. “As past presiding officers of the legislative arm of government at the state level, our appreciation of these challenges is deep because of our direct touch with the people at the grassroots.”

While also noting that:”All of us have supported the issue of autonomy for State Houses of Assembly,” he said Police rescue suspected ritualist from angry mob in Enugu International Democracy Day: UN Chief urges inclusive political process “But beyond the call for autonomy, the synergy, check and balance and collaboration between all arms of government is what we should strive to build because of the interest of our people.”

The governor,who said he was happy to be “at this special occasion that brings together very important stakeholders in the socio-political development of our nation”, explained that “we are here today to among other things, share some thoughts about the contributions of the State Houses of Assembly to the Nigerian Project and indeed highlight the roles the speakers of such Houses have played and are still playing in our socio-political development.”

Lalong explained that “COFSSHA was established primarily to ensure that the reservoir of knowledge and experience acquired by the former presiding officers of state legislatures is not wasted but deployed for the building and sustenance of our democratic experience.”

“That is why since the establishment of the body, we have successfully registered it with the Corporate Affairs Commission and set up a Constitution Drafting Committee to fashion out guidelines on how our organisation will be effectively run,” he explained.