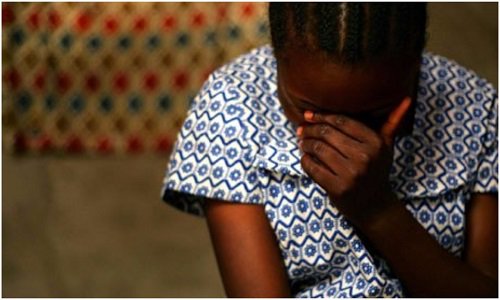 A 14-year-old girl (names) withheld on Monday narrated how her mother Mrs. Florence Ifelaka lifted no finger after she reported the sexual abuses her father was putting her through, The Nation reports.

The victim who was brought to the Nigerian Security and Civil Defence Corps (NSCDC) Lagos command headquarters in Alausa said the sexual assaults started when she was 11 and her mother knew about it.

According to her, the last of the incestuous rape occurred on August 9, at their Mapowu Street, Ojo residence while her mother was away.

She added that she has not seen her period since August, raising suspicions she could be pregnant.

She said: “It happened twice when I was 11 years and I reported to my mother but she did nothing about it. Then, on August 9, he woke me up around 2:25am and started touching me inappropriately and then he raped me.

“My mother was not around. She went to my grandmother’s place. I reported it to her still but she did not do anything,” the teenager said.
Read Also: Teacher ‘rapes’, ‘impregnates’ 12-year-old pupil

Asked why she did not take steps to protect her daughter from her husband, the woman said she was scared, adding that he threatened to deal with them should anyone hear of it.

She further claimed she did not belief her daughter when she told her in 2016 that her father was molesting her.

The woman said: “I was not around because I lost my child and went to my mother-in-law’s house. It was when I came back that my daughter again said her father had slept with her. I confided in my sister and she insisted we must report it.

“It was my sister who reported the matter at Ojo Division of NSCDC on Friday.

The suspect, Chinedu Ifeleka, 46, confessed to raping the girl once claiming he was influenced by alcohol.

He said he had a faint picture of what transpired, adding that he saw his daughter lying down with a whitish substance showing in her private part.

“I woke her and asked what that was. I told her she has started sleeping with men. She denied it and said she was having Candida.

“I asked her how she knew it was Candida and that I wanted to inspect it. That was how I put my hand in it and then I penetrated her. It was only on August 9 that I did it, I have not done it before. It was alcohol that caused it,” he said.

Parading the suspect, Commandant NSCDC Cyprian Otoibhi said he would be handed over to the Domestic and Sexual Violence Response Team (DSVRT) for further investigation and prosecution.

He said: “The suspect will face the full wrath of the law and will be handed over to DSVRT for further investigation and prosecution.

“Rape and incest are heinous crimes and perpetrators of such, when caught, will be made to pay dearly.”

Otoibhi, who took over headship of the command from Tajudeen Balogun, said the NSCDC would continue in its core mandate of protecting critical infrastructure, lives and properties in the state.