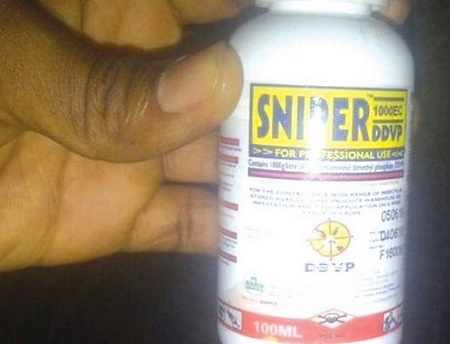 One Kehinde Musa, who sent his enstranged lover, Rasheedat Animashaun, a suicide text message after she ended their relationship, has allegedly committed suicide at his residence, No. 56 Modele Street, Surulere, Lagos State.

The state Police Public Relations Officer, Bala Elkana, said in a statement on Thursday that the deceased locked himself in his room and drank an insecticide suspected to be Sniper, adding that the bereaved family, whom Rasheedat had informed of the suicide note, found Musa unconscious in his room.

He stated that the 25-year-old, died while being taken to hospital for treatment, adding that his remains had been deposited in the mortuary for autopsy.

Elkana said, “On Wednesday, September 18, 2019, around 6.30pm, the Surulere Police Station received information that one Kehinde Musa, 25, of No. 56 Modele Street, Surulere, locked himself up in his room and drank a poisonous substance suspected to be Sniper. He was rushed to hospital but died on the way.

“Preliminary investigation revealed that the deceased had earlier sent a suicide text message to his ex-girlfriend, Rasheedat Animashaun, 21, informing her that he would take his life since she had decided to end the relationship. The said girlfriend promptly informed his family about the text message and they rushed to his house, broke the door and found him unconscious. He was rushed to hospital but was unable to make it. His corpse has been deposited in the mortuary for autopsy.”