See Faces Of 3 Traffic Robbers Nabbed In Lagos By NURTW 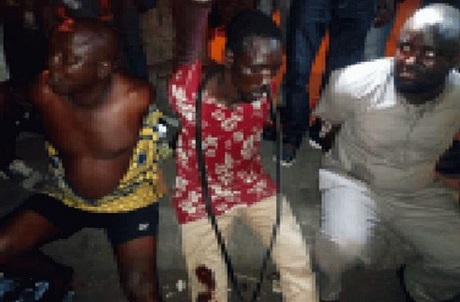 Three suspected members of a robbery gang that had been terrorising motorists and commuters at Mile-2, Lagos, have been arrested by members of the National Road Transport Workers, NURTW, operating on the platform of ECOMOG.

One of the suspects, arrested while removing chrome from a Venza car, led NURTW members to his gang’s hideout where two other suspects were arrested.

The suspects, according to the union’s chairman, Mile 2 branch, Ajele Abeyi, were arrested Friday night.

He said: “For a year now, activities of traffic robbers from Ijesha to Mile 2 have been alarming, as several persons plying the expressway had fallen victims. I was also a victim.

“We decided to assist security agents to get these hoodlums, immediately we were brought into the committee charged with the responsibility of ensuring free flow of traffic along the Oshodi-Apapa Expressway.

“The suspects were immediately handed over to the Police at Area E Command, Festac.”

One of the suspects, who identified himself as Ibrahim, said: “I joined the gang two months ago. I operated around PTMM (Mile 2) where tokunbo (imported used vehicles) are being cleared.

“We usually vandalised vehicles most times during traffic. It is usually done between the hours of 5p.m. and  7p.m. because that is when traffic is much between Ijesa and Mile 2. These ones (pointing to the other suspects) usually bought the vehicle parts from me.

“I sell chromes vandalised from vehicles to them at cheaper rates. We are many that are into this business, but I was the only unfortunate one caught while vandalising rubber from a Venza car during traffic.”

However, his alleged partner in crime who gave his identity as Segun, denied having anything to do with him.

He said: “I don’t know him. The only person I have connection with is this other man (pointing to the third suspect). I knew him from Mushin and have always warned him against buying stolen things. Rather than heed the advice, he would fight with me. I was only implicated.”

On his part, the third suspect, identified simply as Adewale, admitted to have bought stolen goods from Ibrahim.

He said: “I always bought chromes from Ibrahim. I am a transport worker, but whenever business was not forthcoming, I bought chrome from him to complement my daily income as a transporter.

“All of us arrested today are into this business of buying and selling of chromes. We bought these chromes for our agents who resell them.”

Advising other colleagues engaging in the act, Segun said: “I will advise them not to do this business again, because it is bad. I don’t have a choice than to join this business because of lack of money. I regret my action.”