Woman Hacks Husband To Death, Strangles Her Two Children Before Hanging Herself (Photo) 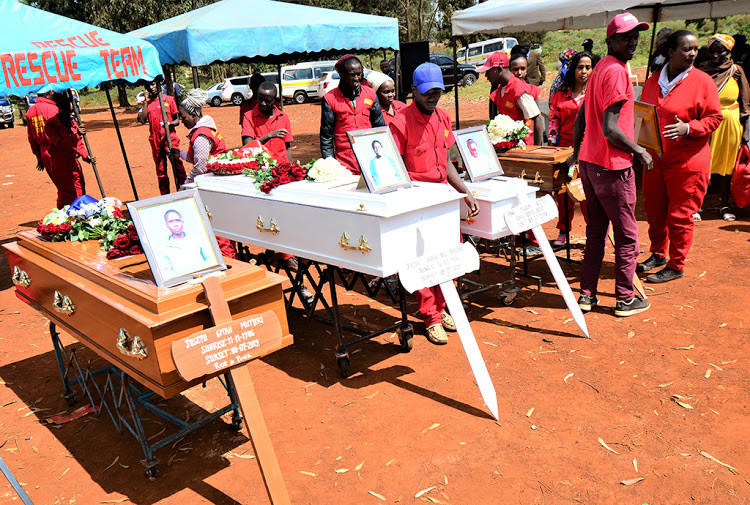 The woman killed her husband and two children

A Kenyan woman who hacked her husband to death and strangled her two children before hanging herself have been laid to rest alongside other family members.

The family of four were all laid to rest on Thursday at Lang'ata Cemetery, Nairobi.

Joyce Wanjiru, 30, reportedly hacked her husband, Joseph Gitau with an axe in the back of the head and stabbed him in the back with a knife at their home in Thome 5 Estate, Nairobi. Gitau’s body was found on the bed.

Wanjiru also strangled their two children. One was found on a couch while the other child's body was discovered on his small bed. The woman who has been with her husband for 10 years was later found hanging from a roof beam.

The motive behind the killings which happened on July 9 in Thome 5 Estate is still a mystery, but it was claimed that the husband was constantly battered by his wife, Joyce Wanjirui.

According to his longtime friend, Steven Kariuki, Gitau was too reserved to say what was really on his mind as he was beaten and humiliated by his wife.

“You would never notice if Gitau had problems or not. I am so mad at him, even if he's dead. He didn't speak to me. I didn't know he had problems. We wouldn't be where we are right now if he did.

Kariuki said his "heart is very broken as we started our friendship back when we were children. Our parents are friends. I used to pass by his workplace quite often and discuss things then go back to our businesses,” Kariuki said at the burial.