Man Batters His Son, Breaks His Head With Iron Over Missing N500 (Photo) 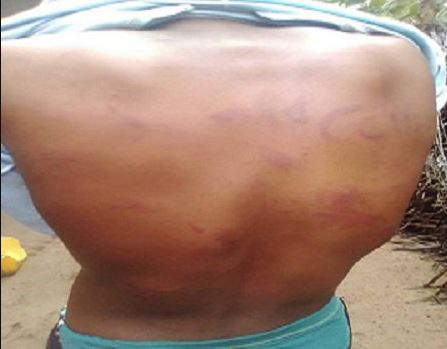 A man identified as Ralph Ohue has been arrested by the police in Lagos for allegedly breaking his son’s head over N500 theft allegation.

He was said to have used an iron to inflict injuries on the 14-year-old boy at their 9, Fatade Street, Isolo home on Wednesday night.

Neighbours said they were shocked when they saw the boy running out of the house with blood all over his body.

It was gathered that the man was enraged when he couldn’t five his N500 and he accused the boy of stealing it. A woman, who gave her name as Funke Ogunbiyi, said the incident occurred around 8pm, adding that another neighbour, who attempted to intervene, received punches from the angry dad.

Ogunbiyi said: “I was hearing noise outside, so I went out to know what was happening. There was commotion in the house opposite ours. Suddenly, I just saw the boy running out. He was covered with blood. I heard the father used an iron to hit the boy on his head. In the course of settling the issue, my neighbour received punches from the boy’s father.


“After the fight, we saw some uniformed men, who came to pick the father. The boy’s mother was said to have come to take him away.”

It was gathered that the Child Protection Network (CPN) learnt of the assault and reported same at Okota Police Station where the suspect was detained.