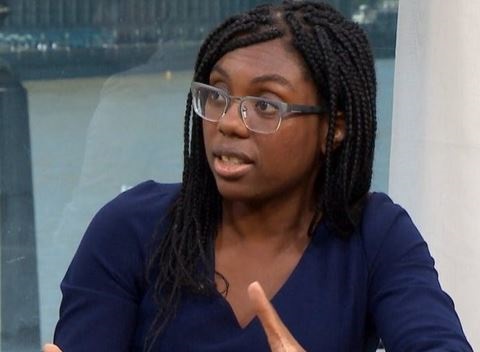 
A Nigerian, Kemi Badenoch, was on Saturday, appointed the junior minister for Children and Families by the new British Prime Minister, Boris Johnson.

Badenoch acknowledged the appointment on her verified Twitter handle on Monday, where she said, “I’m humbled to have been appointed a junior minister at the DfE. A huge privilege to be able to serve and make a positive difference on a number of issues close to my heart. I look forward to working with the ministerial team and everyone at @educationgovuk.”

Here are six things to know about the new junior minister;

1. Badenoch is the Member of Parliament representing Saffron Walden constituency in the UK.

2. In her maiden speech on the floor of the British Parliament, Badenoch revealed that she arrived in the UK aged 16.

3. Badenoch was born Olukemi Olufunto Adegoke in January 1980 in Wimbledon, London to parents of Nigerian origin.

4. Badenoch is married to Hamish Badenoch and they have one daughter and one son

5. Badenoch was first elected as Member of Parliament Saffron Walden on 8 June 2017. She is also the first woman to represent that constituency.