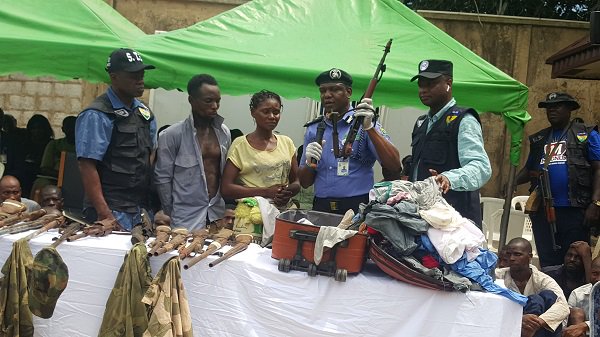 Esther paraded by the police

Security operatives in Ogun state have apprehended nursing mother, Simeon Esther for allegedly being in possession of one AK47 Rifles and 18 rounds of live ammunition.

According to TheNation, the firearm which was carefully concealed in a travel bag, according to the Police was meant for a kidnap operation in Ogun State.

She said she was promised N5000 by her husband who asked her to go deliver the bag to someone in Ogun State.

The Police said other members of the gang were awaiting the weapon which would have been used to kidnap a senior citizen in the state.

The Police, however, did not give details of the foiled kidnap operation.

This was disclosed on Wednesday at the Special Tactical Squad Headquarters in Abuja when she was paraded alongside 37 other suspects who were allegedly involved in kidnapping, armed robbery, cattle rustling, car theft, and culpable homicide.

Speaking during the parade, the Force Spokesman, DCP Frank Mba said: “A mother and a wife, Simeon Esther was arrested in Ondo State for being in possession of one AK47 Rifle and 18 rounds of live ammunition.


“The operatives of Operation Puff Adder prevented her from getting to her destination. She was on a mission to deliver the gun to a gang in Ogun State. The gang had perfected plans to kidnap one of the senior citizens in Ogun State but we were able to nip the crime in the bud.

“They selected her because she is a nursing mother and they believed they will easily beat the prime eyes of our operatives and other security agencies but we intercepted her and also intercepted the expected end recipient of the weapon, thereby aborting the kidnap operation.”

Speaking on how she got involved, Esther said: “On Wednesday, my husband (Bright Gbade) called me and asked me to go and deliver the bag to somebody in Ogun State. He did not even tell me the name of the person, he only told me that the person will call me.


“I did not know the content of the bag and they did not even allow me to carry the bag. They carried the bag themselves to the motor park. It was while we were on our way that the policemen searched the bag and found the gun in it.


“We have been married for two years and I did not know that my husband is a criminal. My husband said he is a fisherman when he was asking me out and before I accepted his proposal, he said he was one of the militants who surrendered their weapons during the amnesty programme.


“I even relocated to my mother’s house because of the way he treats me. I was at my mother’s house when he called me to help him deliver the bag in Ogun State and he promised to give me N5000 but he ended up not giving me.”