Messi To Be Examined By Doctors After Bloody Smalling Clash 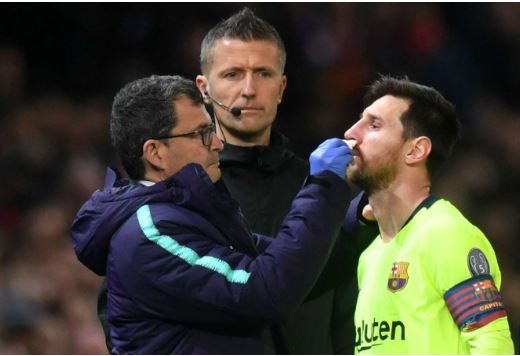 Barcelona head coach Ernesto Valverde said Lionel Messi will be examined by doctors after sustaining a "significant bruise" to his nose in Wednesday's Champions League victory over Manchester United.

Messi took a blow in the first half of Barca's 1-0 opening-leg quarter-final success away to United at Old Trafford.

The Barca captain was left bruised and bloodied after United defender Chris Smalling attempted to win the ball ahead of the five-time Ballon d'Or winner.
Asked about Messi after the game, Valverde told reporters: "Messi wasn't so comfortable after the blow.


"We have to examine him tomorrow to see how he is. He was strong, but he has quite a significant bruise."

Barca were far from their best but still managed to grab an away goal, United defender Luke Shaw deflecting a Luis Suarez header into his own net.

"When you see the atmosphere here and the team they have and it being the Champions League, it's hard to win here," Valverde said.


"It was a difficult game and complicated at times, but we had the clearest chances."

Not since 2015 against Roma has Suarez struck on the road in the competition but Valverde defended the Uruguay forward.

"The value of what he does doesn't depend on whether or not he scores, but what he generates," he added.