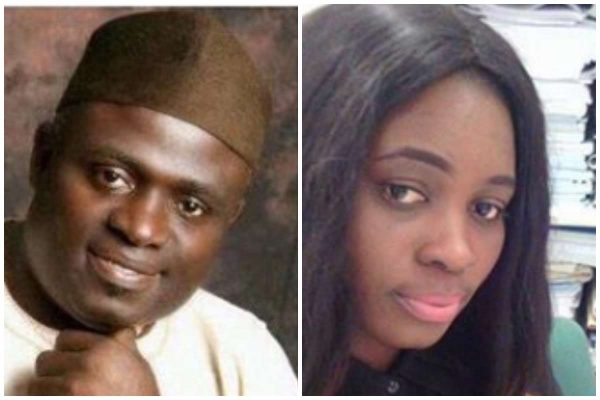 Deborah has been sacked (Photo: Lailasnews.com)

A federal lawmaker and Pension Ad Hoc Committee Chairman’s daughter, Deborah Ighiwiyisi Agbonayinma has been sacked after it was discovered that she has been working with the National Pension Commission (PenCom) with fake foreign and local university degree certificates.

According to The Nation, Deborah’s father is Ehionzuwa Johnson Agbonayinma, the member representing Egor/Ikpoba-Okha of Edo State in the House of Representatives.

A source at the National Assembly, who pleaded anonymity, said Deborah Agbonayinma was sacked about four weeks ago. She worked at the commission for three years.

The source said Miss Agbonayinma worked in other government agency with the fake certificates before joining PenCom.

PenCom confirmed that she was sacked on February 27.

In a telephone conversation with The Nation, Agbonayinma who spoke on his Committee’s probe of Pension Fund Administrators, declined comment on the allegations against his daughter.

Miss Agbonayinma’s curriculum vitae with which she was employed in PenCom stated that she obtained a B.Sc degree in Accountancy with certificate number 12129 on August 8, 2012 from Irish University Business School located on 219 Bow Road, London E3 2SJ.

A verification committee at PenCom, however, found that no such university existed as a valid UK degree-awarding institution.

Having learnt that her foreign degree was ‘fake’, Miss Agbonayinma brought another degree in Accountancy to the Commission as a replacement from Olabisi Onabanjo University, which the university also disclaimed as fake.

A probe of the documents showed that the Accountancy degree with 09083854 as a matriculation number was not listed as part of her academic qualifications in the original curriculum vitae submitted to PenCom, when she was employed.

The Olabisi Olabanjo University (OOU), in Ogun State, in a letter dated February 6, 2019 and signed by the University’s Principal Assistant Registrar in charge of Exams and Records, Mrs O. L. Kaka, told PenCom that Miss Agbonayinma’s academic records and transcripts were fake.

Her CV showed she was mobilised for the National Youth Service Corps (NYSC) from 2014 to 2015, but details are still sketchy on the certificate she presented to the NYSC for the mobilisation.

The CV also showed that she served as an Accountant in the Ministry of Finance, Budget and Economic Development in Edo State during her Student’s Industrial Work Experience Scheme (Scheme) from June 2008 to November 2008 one year after she was enrolled to study Accountancy in London in 2007.

PenCom said: ’’We confirmed through the UK government’s site that the university is not recognised as a valid degree-awarding body.”