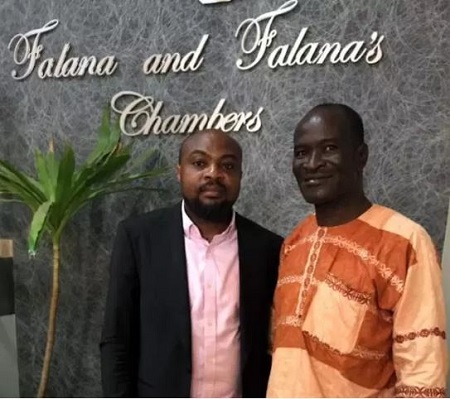 Jones Abiri (right) with his lawyer, Samuel Ogala, shortly after his release by the SSS in Abuja on Monday, April 1, 2019.


A Nigerian journalist, Jones Abiri, who was arrested on Saturdaty by armed men suspected to be operatives of the State Security Service has been released.

The Bayelsa-based magazine publisher was released on Monday afternoon from the secret police’s detention facility in Abuja, his lawyer said.

“He has just been released around 2:00 p.m.,” lawyer Samuel Ogala told PREMIUM TIMES, adding that terms of the release would be disclosed later.

The men who arrested Mr Abiri came in a Toyota Hilux truck. He was arrested in Yenagoa, the capital of his home Bayelsa State where he publishes his Weekly Source magazine.

The SSS initially denied knowledge of the arrest, but those who were with him insisted the agency was responsible.

No official statement had been issued to clarify the arrest, which comes months after the journalist was released from an prolonged detention.

Mr Abiri had been arrested in 2016 on allegations of blackmailing expatriation oil workers in the Niger-Delta. He denied the allegations, but was kept in custody until August 2018 when he was freed on a court order.

He sued the agency and received damages for N10 million in the case, which has neither been appealed nor executed.