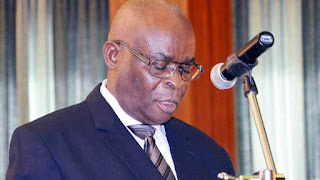 Walter Onnoghen has resigned as the chief justice of Nigeria (CJN) with immediate effect, according to TheCable. TheCable reported that Onnoghen turned in his resignation letter to President Muhammadu Buhari on Thursday evening, a day after the National Judicial Council (NJC) recommended that he be compulsorily retired for misconduct.

By virtue of section 306 of the 1999 constitution, his resignation takes immediate effect.

Section 306 says;
“(1) Save as otherwise provided in this section, any person who is appointed, elected or otherwise selected to any office established by this Constitution may resign from that office by writing under his hand addressed to the authority or person by whom he was appointed, elected or selected. (2) The resignation of any person from any office established by this Constitution shall take effect when the writing signifying the resignation is received by the authority or person to whom it is addressed or by any person authorised by that authority or person to receive it.”

According to TheCable, the resignation was the “best possible option” for Onnoghen under the current circumstance.

The National Judicial Council, NJC, on Wednesday, said it has forwarded the outcome of its investigation into corruption allegations against the suspended Chief Justice of Nigeria, CJN, Justice Walter Onnoghen, to President Muhammadu Buhari, for action.

The legal body, in a statement that was signed by its Director of Information, Mr. Soji Oye, said it convened an emergency meeting to consider the report of the five-man committee it constituted to investigate allegations of misconduct that were levelled against Justice Onnoghen and the Acting CJN, Justice Tanko Muhammad.

However, the NJC, said it decided to refrain from considering the allegation that Justice Onnoghen failed to declare his assets, saying it would amount to subjudice since the matter is in court.