BREAKING! Court of Appeal Says Ademola Adeleke Is Qualified to Contest For Governorship 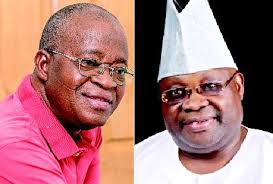 The controversy over the eligibility of Senator Ademola Adeleke to contest the Osun governorship election has been put to rest as an Akure Federal Court of Appeal has by 11 AM today reaffirmed his qualification and eligibility to contest the office.

The Akure Court of Appeal dismissed an appeal against the judgement of Osogbo High court which had confirmed the eligibility of Senator Ademola Adeleke to contest for the governorship of Osun state. The Osogbo High Court had earlier ruled that Senator Adeleke is qualified to contest for the governorship having been educated up to secondary school level.

The petitioners however proceeded to appeal against the ruling ,insisting that the Senator is not qualified and therefore Dr Akin Ogunbiyi who is the second runner up at the governorship primary should be declared the winner of the primary.