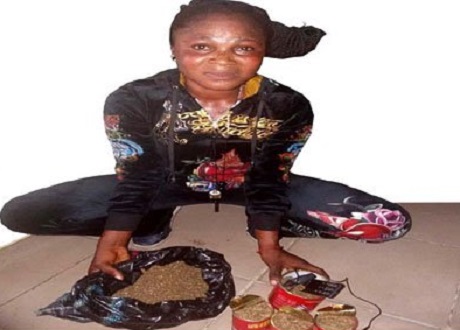 Officials of the Nigerian Prisons Services (NPS) have foiled an attempt by a woman to smuggle cannabis sativa, popularly called Indian hemp into Ikoyi Prisons.

The woman whose husband is detained at the facility was said to have attempted to capitalize on humanitarian service providers and inmates’ relations’ visit to bring in the illicit drug.

It was learned that during such visits, people are allowed to bring in things for the inmates.

The incident occurred barely two months after the prison foiled a three-man gang’s attempt to peddle Indian hemp within the facility, with the aid of its Closed-Circuit Television (CCTV).


The woman allegedly concealed the substance, which weighed about 930 grams, in four big tomato tins.

The Deputy Controller of Prisons (DCP), Ikoyi Prisons, Tolu Ogunsakin, it was learned, has begun the investigation to determine the culpability of her husband in the matter.

The woman was shocked when officials at the gate insisted on a thorough check of every item brought into the prison.

“When the tomato tins inside her package were opened, we found Indian hemp, a phone and a sim card,”

Lagos State Controller of Prisons (CP) Tunde Ladipo told us that the suspect would not escape justice.

He expressed surprise that a woman, under the guise of humanitarian service, could attempt to smuggle Indian hemp into the prison.

Ladipo said the prison was not taking the matter lightly, adding that those found culpable would not be spared.


“We will rid the prison of bad influence from outside, to reform the inmates.”


The woman, he said, had been handed over to the National Drug Law Enforcement Agency (NDLEA).