Two Young Women Fight Dirty Over A Man In Lagos 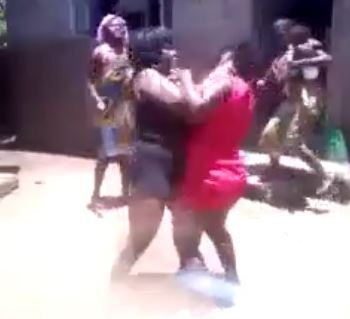 The police in Lagos have arrested two ladies, Comfort Onumebu, 33 and Christy Ogbu, 42, who reportedly engaged in a bloody public fight over a man on the street in Ijegun area of Lagos where the man Cosmos Ekong resides.

The man, Ekong, may not have anticipated what will later happen when he secretly engaged the two ladies before the women later met.

It was gathered that trouble started when the ladies eventually met at the Ekong’s place and had a disagreement which led both of them engaging in a bloody fight which disturbed the peace in the neighbourhood.

The younger of the ladies, Comfort, felt that Ekong had much interest in Christy and then reportedly hired some thugs to attack him thereafter. They were said to have attacked Ekong and his dog, carted away his plasma TV and laptop worth over N92,000 and escaped as compensation for Comfort.

The incident was reported to the police at Isheri Oshun Division; the two ladies were arrested and detained at the police station.

It was gathered that they were ashamed to state the cause of the fight as Ekong was the real issue between them. The police found their action shameful and charged them before the Ejigbo Magistrates Court for affray.

Comfort was also charged for stealing and the assault on Ekong and his dog.

They pleaded not guilty. The prosecutor, Inspector G. Simon, did not oppose their being granted bail but asked the court for another date for hearing.

Thus, the Presiding Magistrate, Mr. L.K.J. Layeni, granted them bail in the sum of N50,000 with one surety each in like sum.

They were remanded in prison custody pending when they will perfect their bail condition.