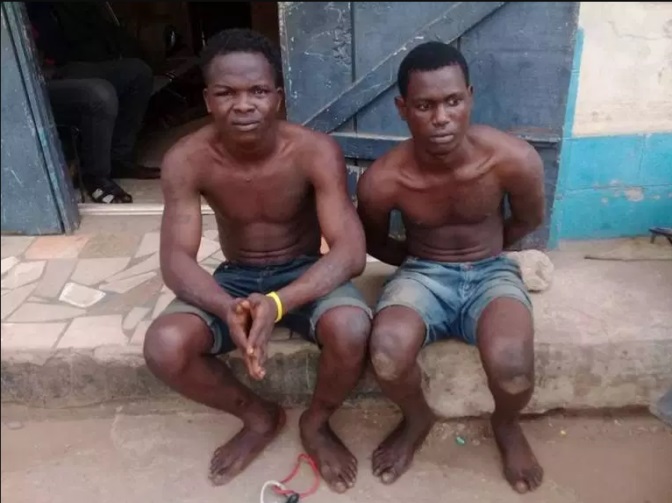 Two cultists who specialize in attacking and robbing residents early in the morning in Ikorodu area of Lagos have been finally apprehended by security operatives.

They both confessed to that they are members of Eiye cult in Ijebu-Igbo.

They were arrested while attacking Abass Sodiq Olawuyo,a 24 year-old resident of Itunmoja area of Ikorodu and a student of Adeniran Ogunsanya College of Education, Lagos, in the early hours of Monday, …

Recounting his ordeal in the hands of his attackers to THE IMPACT, Abass stated that:

“I woke up around 4am and left home around 4. 45am but I was attacked at the Ladega junction on my way to Ikorodu garage.


“While I was at the Ladega junction, I saw these two guys (Raheed and Wasiu) passing by and suddenly they turned back and whistled as another two guys were coming in my front. I was, however, focused on where I was going and did not pay attention to them.


“It was those coming in the front that first held me before the other two (Rasheed and Wasiu) joined them and they started speaking in a language that I did not understand and I told them that I cannot understand them.


“While they held me down and made attempt to remove my phone and money from my pockets, I held on to the pocket where I have my phone and also tried to prevent them from removing the #45,000 cash in the other pocket”.

He explained that the money was his school fees given to him by his mum the previous day.

“While I was struggling and holding my two pockets tightly, Wasiu brought out a charm and wanted to hit me with it but I grabbed his hand with one of my hands while I used the other one to secure the pocket where I had my phone.


“It was while I was trying to prevent them from hitting me with the charm that they succeeded in removing the money”.


Abass said while he was struggling with his attackers, he started shouting “thief! thief!! thief!!!” while Wasiu was also shouting “thief” as well but that he held on to him.


“The shout of “thief” later attracted Onyabo men to the scene and when they could not ascertain the real thief and the victim since both of us were shouting “thief” at each other, they attempted running over us with their vehicle and I quickly jumped away while Wasiu was crushed.


“In order to prevent him from running away after he was hit by the vehicle, I jumped on him and held him to the ground before Onyabo men arrested both of us”.