Writing on his Twitter page, Omokri claimed that Sanwo-olu’s victory means the National Leader of the All Progressives Congress (APC), Bola Ahmed Tinubu, has a “new employee”.

“Bola @AsiwajuTinubu has a new employee. 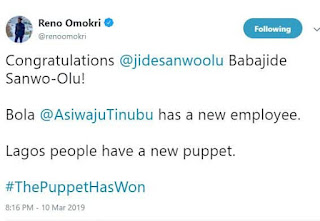