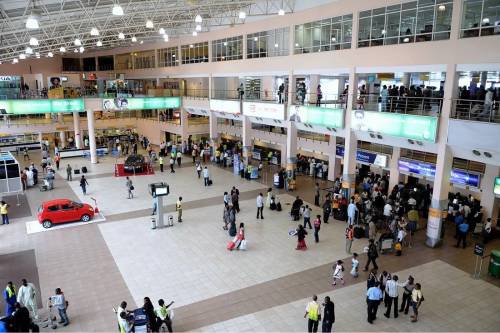 According to a report by SaharaReporters, some passengers of domestic airlines in the country are having a herculean tasks locating the rightful terminals that the airlines they booked with will eventually depart or arrive from.

This confusion has also led to chaos among travellers, their drivers and towing vehicle companies operating at the two terminals at the Murtala Muhammed Airport (MMA), Lagos.

The two domestic terminals in Lagos are the Murtala Muhammed Airport Two (MMA2), which is owned and operated by Bi-Courtney Aviation Services Limited (BASL), and the General Aviation Terminal (GAT), owned by the Federal Airports Authority of Nigeria (FAAN).

This confusion began when Arik Air and Air Peace moved some of their operations away from GAT to MMA2. Some of the affected passengers said that there wasn't enough sensitisation to the clients of the airlines before and after the relocation of some of the services from GAT.

For instance, some travellers have missed their flights after presenting themselves at the wrong terminals, without compensation by the affected carriers. Mostly affected in the confusion are the passengers who booked online.

At the GAT area on Tuesday, a particular driver who wrongly parked at GAT to pick his boss was seen struggling with officials of a towing company who wanted to impound his car for allegedly parking at a wrong place within the area.

After much argument, which almost led to fisticuffs between the two, it was later realised that his boss whom he had come to pick up would arrive on Arik Air from Port Harcourt at MMA2 and not GAT, where he had earlier parked.

A source close to FAAN said some of the passengers had complained to it about the confusion created by the splitting of the operations between the two terminals by some of the airlines.

The source said: “The two airlines (Arik Air and Air Peace) also have stands at MMA2 apart from the GAT they were operating all their flights from before now. Some passengers who were supposed to board planes from MMA2 are seen missing the flights because they initially went to GAT where they used to board flights to their destinations in the past.


“For instance, some travellers with drivers are seen parking their vehicles at wrong places and today degenerated to fisticuffs between drivers and a towing company at GAT. Before now, some of the vehicles have been towed."

The source called on the managements of the two airlines to embark on publicity by informing air travellers of the appropriate terminals for each flight.

It would be recalled that April last year, Arik Air had announced the movement of its Port Harcourt Airport operations to GAT.

The airline had said that all daily flights to Port Harcourt International Airport would cease to operate from GAT and would depart and arrive at MMA2.

Also, in January, Air Peace relocated its Lagos-Akure, Lagos-Kaduna and Lagos Port Harcourt NAF Base flights out of GAT to MMA2.

The airline said that the relocation of some of its services to MMA2 was to enhance its quality services to its esteemed customers, adding that apart from the three routes, other local services it plans to come onboard with would be operated at the terminal.

A statement by the Corporate Communications Manager, Air Peace Mr. Chris Iwarah, had said that the development was in line with its expansion plan and strategy to deliver a much better experience to members of the flying public using its services.

Iwarah stated that the expansion of its services to MMA2 would further address the space constraints it was facing at GAT, but noted that other routes it operates to would continue to operate from GAT.

He said: “We are pleased to announce the extension of our flight operations from our main base, the General Aviation Terminal (GAT) of the Murtala Muhammed Airport, Lagos to the Murtala Muhammed Airport 2 effective from January 2, 2019. We will now operate our Lagos-Akure, Lagos-Asaba, Lagos-Kaduna and Lagos-Port Harcourt NAF Base flights from MMA2. Other new domestic routes we plan to launch soon will also be done form the facility.


“Other domestic flights out of Lagos will, however, operate from our main Base, the General Aviation Terminal of the Murtala Muhammed Airport, Lagos. We are quite hopeful that the expansion of our Lagos base to MMA2 will afford us the space and convenience to deliver first-class flight experience to our loyal customers."