"Buhari Is Maybe Poorer Than He Was In 2015" – Osinbajo, Says He Is Richer Than The President 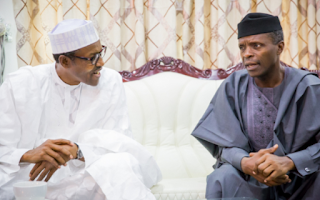 The Vice President, Prof. Yemi Osinbajo has stated that President Muhammadu Buhari may be “poorer” than he was in 2015.

Osinbajo stated this while disclosing that Buhari’s assets declaration form he saw indicated that the president was poor.

In a statement signed and forwarded to us on Friday by Osinbajo’s Senior Special Assistant on Media and Publicity, Laolu Akande, also thanked Nigerians for voting Buhari for a second term.

The statement reads partly: “Everybody knows that this was not exactly an easy campaign but I believe that God saw, first the heart of Mr President.

“Here is an honest man, and as I said during the course of the campaign, even his worst enemies agree that he is a man of integrity.

“In any event, there are many few Nigerians who would have been Minister of Petroleum, Governor of the whole of the Northeast, Head of State, not once or twice, but thrice, and still have just one home in Kaduna and some very modest place in Daura. Very few people are like that.

“When I looked at his assets declaration form, I was checking it in 2015, I said to him, “Mr President, I am so much richer than you, it is an embarrassment.” He said, “I am only a soldier, you are a big lawyer so you should have more money than me.” I can tell you that he is perhaps; even poorer than he was in 2015 when I saw his declaration of assets form.

“We are all grateful to God for this great victory, and the real heroes are you all seated here today, who went out every day to campaign and talk about what you believed about our government, what you thought this government could do for the Nigerian people.

“One thing that is clear to me is that your belief and commitment were not wrongly placed. You are absolutely right that the government of President Muhammadu Buhari is the appropriate and right government for Nigeria at this time.”