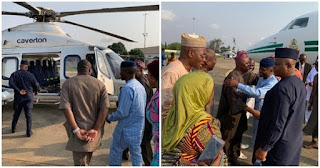 Following Vice President Osibanjo’s helicopter crash on Saturday, February 2, 2019, The Caverton Group, has gifted him with another helicopter, albeit for campaign purposes.

The Caverton group which operates in the marine and aviation logistics sectors of the Nigerian oil and gas industry and based in Lagos state noted that the delivery of the helicopter was given in line with their the group’s commitment to upholding safety and professionalism.

The group revealed this via a tweet shared on its official Twiter page on Sunday, February 3, 2019.

Recall that the Vice President and nine crew members survived a helicopter crash after the one conveying them crash-landed at Kabba, Kogi state on Saturday morning.

According to the reports, one of the VP’s brothers had been in the helicopter and survived the crash as well.

Kiki Osibanjo who has noted negative opinions on the helicopter crash, with some wishing her father dead, has asked for mercy on these “heartless” people’s behalf.